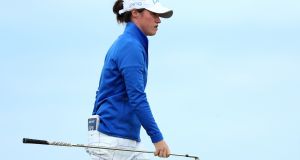 It’s good to have friends in high places, and Leona Maguire – who has enjoyed a busy playing schedule of late with a five-week straight run of tournaments in Australia and the United States – will use her week off to avail of the top-class practice facilities at Lake Nona . . . thanks to a helping hand from singer Niall Horan.

Maguire – who had a career-best finish of fifth in the Florida’s Natural Charity Classic on Sunday, an event won by former LPGA Tour player Kelly Tan in a playoff – will stay and play at the exclusive Orlando country club which numbers Graeme McDowell, Ian Poulter, Justin Rose and Henrik Stenson among its residents.

“I’ve a lot of positives to take away,” said Maguire of her top-five finish, which moved her to 12th in the latest Volvik Race to the Card order of merit on the Symetra Tour. The top-10 at the end of the season will secure automatic full-playing cards on the LPGA Tour for 2020.

Leona had twin sister Lisa on the bag for her latest outing, and the pair will use the facilities at Lake Nona to prepare for upcoming tournaments.

“It has been a great week, having Lisa with me was great. She knows my game inside-out. Now it’s a week off together to practice,” said Leona.

The sisters are clients of Modest Golf, the sports agency founded almost three years ago by former One Direction star Horan. Indeed, it was a significant weekend for the agency as Italian Guido Migliozzi – the first player on their books – secured a breakthrough win on the European Tour at the Magical Kenya Open.

With a well-earned week away from tournament play, Leona’s next outing will come in the IOA Championship in Beaumont, California (a title won by Stephanie Meadow last year). Lisa, who doesn’t have a card on the Symetra Tour, is hopeful of some starts on sponsors’ exemptions.

Pádraig Harrington gets back in the swing of things

He’s back! Europe’s Ryder Cup captain Pádraig Harrington, who has been sidelined of late due to a wrist injury, returns to tournament action this week at the European Tour’s stop in Malaysia, where he will be the lone Irish player in the field at the Maybank Championship at Saujana Country Club in Kuala Lumpur

Harrington suffered the injury just before Christmas when slipping on stairs at his Co Dublin home, although it was a number of days before he realised there was a broken bone – along with soft tissue damage – to his wrist.

The injury layoff meant that the Dubliner missed out on scheduled events on the European Tour – in Abu Dhabi and Dubai – and also on the PGA Tour (Pebble Beach and the Honda Classic) but has finally been given the medical all-clear to resume tournament play in Malaysia.

In many ways, it will be a return to familiar territory for Harrington who was a runner-up to Vijay Singh (losing in a playoff) when he competed in the Malaysian Open over the same course . . . back in 2001!

Rory McIlroy’s win in The Players earned him a place in a rather elite club, of those players who have won four Majors and 15 tournaments on the PGA Tour before the age of 30. The 29-year-old Northern Irishman joined none other than Jack Nicklaus and Tiger Woods in achieving the feat.

“It was nice to get in contention and to get under the heat, to have to hit shots under a lot of pressure. I haven’t been in that position for a while” – Jim Furyk after his runner-up finish in The Players. The 48-year-old American – who has conditional status on the PGA Tour – jumped from 167th in the world rankings up to 57th, which has earned him a place in the field for next week’s WGC-Dell Technologies Matchplay in Texas.

The new trophy is horrible. If I was McIlroy I’d request the old one. Jodie Mudd has mine ??

Mark Calcavecchia – who lost out by one stroke to Mudd in 1990 – has a preference for the old Waterford crystal trophy over the new golden Tiffany one.

9 years ago this month had opportunity to sit w/ winless 20-yr-old @McIlroyRory & talk “patience.” Soon after, he shot a Sunday 62 at @QuailHollow for 1st @PGATOUR win. Today Rory showed great discipline & patience down stretch to win @THEPLAYERSChamp! Very proud & happy for him!

– Jack Nicklaus gives McIlroy the thumbs-up for taking a leaf out of the Golden Bear’s book.

Say what you want about Tommy , but the lad plays to win! Took 17th hole on today with no fear. Loved his attitude out there ????

– Tommy Fleetwood’s caddie, Ian Finnis, not having any of the criticism hurled at his man for splashing out and finding a watery grave at the famed Par 3.

Rory, some playing lad - that resume keeps getting better & better ??

– Luke Donald, not a bit envious, of McIlroy’s ever-growing and impressive career CV.

In the Bag - Rory McIlroy at The Players

Question
Player A and Player B – in a strokeplay competition – hit their tee shots in the same general direction, both finishing in rough down the right side of the fairway. Player A finds a ball and plays it. Player B continues to search for her ball and cannot find it. After three minutes, Player B starts back to the tee to play another ball. On the way, Player B finds Player A’s ball and knows then that Player A has played her ball in error. What is the ruling?

Answer
Player A gets a two strokes penalty for playing a wrong ball and must then play her own ball (Rule 6.3c). Regarding Player B’s ball, Player B’s original ball was lost and she must put another ball in play under penalty of stroke and distance (Rule 18.2b), because it was not known or virtually certain when the three-minute search time expired that the ball had been played by another player.

1 No Masters, so Tiger Woods battles son Charlie for green jacket
2 Stephen Kenny: ‘I want people to come and look forward to watching this team’
3 Germany well ahead of the curve as Bundesliga gears up for return to action
4 America at Large: Hurling fan Dowling leading the fight against Covid-19
5 Conor McDonald: ‘People in fitness industry need to be careful what they put online’
Real news has value SUBSCRIBE