Wilson leads by one in Qatar 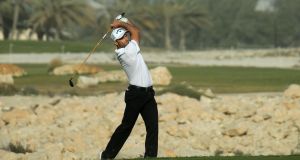 Oliver Wilson of England plays into the 18th green during the third round of the Commercial Bank Qatar Masters. Photograph: Warren Little/Getty Images

Oliver Wilson will take a one-shot lead into the final round of the Qatar Masters as he looks to reignite his career with a victory in Doha.

The Englishman carded a 69 to get to 10-under in round three, one shot clear of Australian Nick Cullen, Spaniard Nacho Elvira, Frenchman Mike Lorenzo-Vera and South African Erik van Rooyen.

A win on Sunday would represent another remarkable comeback in a rollercoaster career for the 38-year-old, who represented Europe at the 2008 Ryder Cup but fell to 792nd in the world before he won the 2014 Alfred Dunhill Links Championship.

He slipped outside the top 2000 last summer but has since claimed two victories on the second tier Challenge Tour and was pleased with the maturity he showed as he looks for a third win in just under eight months.

“I’m delighted quite frankly, it’s hard out there,” he said after his round. “It’s really hard to get it close even from the fairways with the wind.

“The last four holes I suddenly found something and hit good shots all the way in. Maybe it’s a bit of maturity or something, I don’t know, but I’m really pleased that I allowed that to happen. Sometimes it’s easy to lose your head a little bit.”

Starting the day a shot off the lead, Wilson birdied the second and fourth to take a share but dropped a shot on the fifth before making nine straight pars.

A gain from eight feet on the 15th had him back in a tie for the lead and he claimed it on his own on the last thanks to a beautiful chip from over the back of the par five that set up a birdie.

Australian Jake McLeod - who made a hole-in-one on the third - countryman Min Woo Lee, Belgian Thomas Detry and Swede Anton Karlsson were eight under, a shot clear of a group of seven players including Welshman Bradley Dredge.