McIlroy and Woods toil but finish within striking distance in Ohio 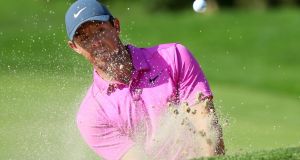 Rory McIlroy plays his shot from the bunker on the 17th hole where he holed out for a birdie during the second round of the World Golf Championships-Bridgestone Invitational at Firestone Country in Akron, Ohio. Photograph: Gregory Shamus/Getty Images

Tiger Woods teased his fans with a hot start to his second round at the Bridgestone Invitational on Friday but could not maintain the run in a slightly disappointing day at a venue he has all but owned.

Rory McIlroy also had his issues, misjudging several wedge shots but at day’s end both he and Woods were within striking distance at the World Golf Championships event in Akron, Ohio.

Woods, an eight-times winner at Firestone Country Club, has not won anywhere since his 2013 victory on the course, which is hosting the event for a final time before it moves to Memphis next year.

After a bad drive led to a bogey at the first hole, he fired up a large gallery with three birdies in the next four holes.

But he picked up only one birdie the rest of the way, at the par-three 12th, where he hit an exquisite draw with a seven-iron that nestled within two feet of the cup.

He blamed his underwhelming round on struggling to adjust to the pace of the greens.

“Just didn’t quite hit the putts hard enough today but when I did I made them.”

Two weeks ago, Woods charged into the lead halfway through the final round at the British Open at Carnoustie, until a double-bogey at the 11th hole unravelled him. He eventually finished three shots behind winner Francesco Molinari.

McIlroy also contended at Carnoustie, charging even later than Woods but coming up two shots short.

The Northern Irishman was frustrated on Friday by a series of poor approach shots, until a holed bunker shot at the 17th lifted him. With another birdie at the last, a 67 left him three off the pace.

“I was getting frustrated on the back nine,” he said. “I was putting it in position where I should have been giving myself birdie chances and I was having to hole five- and six-footers for par so I think my patience was rewarded.

“Not that I hit bad wedge shots. My distances were a little bit off.

“I started hitting some better wedge shots coming in and it added up to three under somehow so still right there going into the weekend.”

Englishman Fleetwood carded seven birdies to match his lowest career round on the PGA Tour, a seven-under-par 63, while American Thomas drove the ball superbly for a 64 that included seven birdies in a 10-hole stretch.

Fleetwood, who contended at both the US and British Opens this summer, has emerged as a player of the highest calibre, even without a breakthrough win in the United States.

“It’s great we keep getting in position,” he told Golf Channel.

“We’re obviously doing a lot of things right. Winning is hard. Hopefully eventually it will happen but it’s great to put myself back in position again.”

World number three Thomas was pleased his score reflected the quality of his game as he warms up to defend his US PGA Championship title next week.

“I know I’ve been close for a while,” he said. “I just haven’t really had the results or the score to [reflect] it.

“I’m just trying to stay patient, continue to work on the things that we’re working on and glad that’s it’s showed the last two days.”

Poulter was also a happy man.

“I think it was pretty good,” said the Englishman. “It’s always tough to follow a near perfect round of golf. Today I didn’t drive it quite as well, didn’t putt quite as good as I wanted to.

“I’d like to get back in the winners’ circle and if it comes this year great.”

Players Championship winner Webb Simpson holed a wedge from 111 yards for eagle at the par-five 16th and joined Woods on six under in the World Golf Championships event.

Paul Dunne closed with back-to-back birdies to post a two-under 68 and move to one under in the no-cut event.

Out-of-form defending champion Hideki Matsuyama battled to a 72 and fell 10 shots off the pace on the same mark.