Rory McIlroy keen to add to his WGC haul in Shanghai 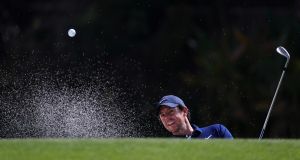 Rory McIlroy plays out of a bunker on the second hole during the pro-am ahead of the WGC HSBC Champions at Sheshan International Golf Club in Shanghai, China. Photograph: Matthew Lewis/Getty Images

Rory McIlroy is determined to end a four-year wait for a World Golf Championships victory at the WGC-HSBC Champions event in Shanghai this week.

World number two McIlroy’s second and latest WGC victory came at the WGC-Cadillac Match Play in 2015, and since then he has had nine top-10 placings.

“WGCs are some of the biggest tournaments we play. It’s always the strongest fields,” McIlroy told www.europeantour.com. “You’re playing against the best players in the world. To win those events, it means that you’ve done something very well.

“And actually played okay on the Match Play, ended up being beaten by Tiger [Woods].

“I started this year maybe eighth or ninth in the world. If I play well the next few weeks, I’ll have a great platform going into next year.”

The 15-time Major champion, who equalled Sam Snead’s record of 82 PGA Tour victories with his win in Japan, is not among the 78-strong field at the Sheshan International Golf Club.

But a star-studded field featuring 34 of the world’s top 50 players does include defending champion Xander Schauffele and Justin Rose – who both tee it up alongside McIlroy in Thursday’s final group – and British Open champion Shane Lowry.

Rose won in Shanghai two years ago and is targeting a late dash for Race to Dubai glory on the European Tour.

“It’s been a good little hunting ground for me the last couple of years and it’s a golf course I really enjoy,” Rose said.

“With the way the points are weighted with the prize fund in Turkey and Dubai, it offers me the opportunity to make a run.

“I’ve probably got to win the last three to challenge Shane and Jon Rahm and the guys that are doing really well, but that’s the situation I put myself in in 2017 and I very nearly did it.”

There are plenty of Ryder Cup stars in China with English quartet Paul Casey, Ian Poulter, Tommy Fleetwood and Tyrrell Hatton all playing, as well as Sweden’s Henrik Stenson and Spain’s Sergio Garcia.

Former British Open champion Francesco Molinari is also hoping to make a strong finish to the 2019 European Tour season during the next few weeks.

The Italian has struggled to find his best form since he frittered away a promising position to win the Masters at Augusta.

“It’s been a learning year, especially since April, obviously things have not gone how I was hoping,” Molinari said.

“I’m just trying to learn from how it’s been and get back to where I was at the beginning of the season or last year.

“It’s still a busy stretch coming these next five weeks, all big tournaments and it would be nice to finish the year well and build some momentum going into next season.

“So that it doesn’t feel like I have to start from scratch next year.”