Graeme McDowell in pursuit of Byeong Hun An at CJ Cup

Northern Irishman opened with a bogey-free round of 68 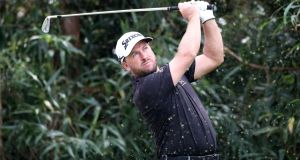 Graeme McDowell hits his tee shot on the seventh hole during the first round of the CJ Cup @Nine Bridges at the Club at Nine Bridges in Jeju, South Korea. Photo: Chung Sung-Jun/Getty Images

Korea’s Byeong Hun An delighted the home crowd by carding an eight-under-par 64 to lead the CJ Cup Nine Bridges on Jeju Island.

An fired eight birdies in a bogey-free round to lead Chile’s Joaquin Niemann by a shot, with former world number one Jason Day a shot further back following a 66.

Defending champion Brooks Koepka is five shots off the pace after a 69 matched by the English pair of Ian Poulter and Tyrrell Hatton and Norway’s Viktor Hovland, whose 18th consecutive round in the 60s established a new PGA Tour record.

Graeme McDowell sit four shots off the lead after a very tidy opening round of 68 which included four birdies and no bogeys.

Koepka’s erratic round included four birdies, three bogeys and an eagle on the par-five 18th and the world number one said: “Just needed to clean up a few things, missed a couple of short putts, a little sloppy there, but other than that I thought I hit the ball good.

“The wind was just so light today it felt like it was switching quite a bit and it made a difference on a couple of holes.

Day, who is hoping International Team captain Ernie Els will give him a wild card for December’s Presidents Cup at Royal Melbourne, boosted his chances by carding six birdies in a bogey-free 66.

“It is certainly disappointing not to make the team on my own merits, but it is a reminder that nothing is given to you in this game,” the Australian said.

“I certainly want to be on the team and believe I can be an asset to the Internationals. Being in my home country certainly gives me an edge and I’ve had some success on the sandbelt (courses) and Royal Melbourne in the past.”