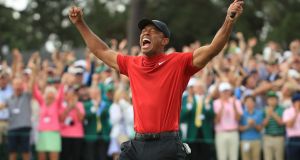 Tiger Woods celebrates his win at the 2019 Masters. The draw of his story has always been that his facility for the impossible continually breached the boundaries of our ordinary imaginations. Photograph: Andrew Redington/Getty Images

The two talking heads on CNN were split-screening on the future of the Republican party, point-scoring this way and that, pronouncing upon immigration and a disaffected populace. Sharp-suited political operatives, holding forth on matters of import, talking big talk. Until they weren’t. Christiane Amanpour jumped in between them and said, “We’re breaking now to go to our studio in Washington for news of the golfer Tiger Woods…”

Get your pencils out, class. Start writing. For whom else does the CNN international feed break from regular programming to go live to a car wreck? Are there five world leaders? Three Royals? Recording artists? Movie stars? In sport, they’d likely do it for LeBron, probably Serena, possibly Tom Brady. But you’re strictly into the maybes after that. There’s only one Tiger Woods.

Always has been. That’s been the way of it ever since his first appearance in a professional golf tournament this week 29 years ago. He was 16 years old playing the LA Open at Riviera back in 1992 – the tournament now called the Genesis Invitational, whose branded car he had to be cut out of yesterday morning. For the three decades in between, most golf stories have been played out in his shadow, one way or another.

The draw of the Tiger Woods story has always been that his facility for the impossible continually breached the boundaries of our ordinary imaginations. Nobody else could have become the most famous athlete in the world while playing a sport with such an insular, exclusive history. Nobody else could have changed that sport so completely, from the shape of the players to the technology of the equipment to, literally, the topography of the landscape. Golf courses hundreds of years old have had to be changed because of Tiger Woods and everything he did.

For those in the sport, nobody else has ever been as important. Go back through Jack Nicklaus and Arnold Palmer and Ben Hogan and Bobby Jones and Henry Cotton and all those old names. They were all the greatest, they all moved the sport along on its way. But none of them carried it on their back like Woods did. None of them changed it to anything like the same degree.

On Sunday night, while Max Homa and Tony Finau were limbering up for their play-off at Riviera, a graphic flashed up on-screen with Finau’s big smiley face alongside. Unfairly or not, the big American has become something of a punchline among golf-watchers on account of seeming to always contend without actually winning. His only tour victory came in Puerto Rico in 2016.

The graphic showed that in the five years since that win, Finau has won over $18million in prizemoney worldwide. That’s four million quid more than an all-time great like Greg Norman won in his entire career. All in five seasons of winless golf. Norman finished playing competitively just as Woods was getting started. First and foremost, that’s how Woods changed golf.

But that still doesn’t really explain his draw beyond the confines of the sport itself. For that, you get out into the murky waters of fame and celebrity and a life that was never ordinary. Away back as far as 1996, in his famous Sports Illustrated piece, the writer Gary Smith pitched Woods against the machine, the ceaseless cogs of the outside world that was going to grind away at him.

“The machine will win. It has to win, because it makes everything happen before a man knows it. Before he knows it, a veil descends over his eyes when another stranger approaches… Even with all the best intentions, how can he help but be a little more removed from the world he’s supposed to change, and from his truest self?”

We all saw how it played out between him and the machine. The battle sucked in people who followed sport and plenty more who didn’t. Initially, with his 14 majors in 11 years, with his transcendent ability to be more than just a sweet striker of a golf ball, he looked like he had the whip hand. But then 2009 happened and his marriage broke up and his double life was exposed and suddenly, the machine had him in its teeth again.

The to-and-fro made him more fascinating than ever. The push-and-pull between Tiger Woods and the machine kept us all rapt. Through all the comebacks, all the surgeries, through New Tiger and the glorious 2019 Masters, all the way through to now and what everyone knew was the last knockings of the most extraordinary career.

All the way to two talking heads silenced, as CNN cuts to a mangled car, crumpled on the side of a Californian road. Tiger’s fate as yet unknown, news of it hungered for by millions across the world.

Blackmore back among the winners at Fairyhouse 21:32
Elite athletes still required to undergo 10-day mandatory quarantine 20:32
Klopp says Liverpool need ‘perfect performance’ to overcome Real deficit 20:00
Grand National hero Rachael Blackmore on the mark at Fairyhouse 19:32
Solskjaer’s son has the appetite for a go at Mourinho 18:50
Here is your handy guide to sport on television this week