Chris Wood takes one-shot lead into final round in Sweden 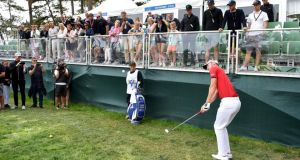 England’s Chris Wood chips from the rough during the third round of the Nordea Masters at Barseback Golf & Country Club in Barsebackshamn, Sweden. Photograph: Stuart Franklin/Getty Images

England’s Chris Wood will take a narrow lead into the final day of the Nordea Masters after reaping the benefit of some hard work in Malmo.

Wood carded a third round of 68 at Barseback Golf and Country Club to finish nine under par, a shot ahead of Italy’s Renato Paratore and France’s Benjamin Hebert.

Denmark’s Thorbjorn Olesen is a shot further back after a lost ball on the 18th led to a double-bogey six, with halfway leader Jamie Donaldson struggling to a 75 to fall three off the pace alongside Max Orrin and Wang Jeunghun.

Wood began the day four shots off the lead, but made the ideal start with a birdie on the first and picked up another shot on the fifth before dropping a shot on the sixth.

A birdie on the par-five ninth took Wood to the turn in 34 and the 29-year-old from Bristol followed it with three more in the next four holes and another on the 16th before failing to get up and down from a bunker on the last.

“I’ve played nice all year without getting any results so in my mind it’s a matter of time before I start getting some decent results,” Wood told Sky Sports.

“The wind in the pro-am on Wednesday afternoon threw me out a bit and I struggled Thursday, battled round in one over and have been working hard late at night with some drills in the gym just trying to get a bit of a feel for the swing back and it’s getting there.”

Wood could only finish 49th in the defence of his BMW PGA Championship title at Wentworth last week, but a fourth European Tour title on Sunday would be the ideal response that would also secure a place in the US Open.

The top 60 in the world rankings on June 12th will qualify for the year’s second major at Erin Hills, with Wood currently 68th.

“It was a busy week for me last week but driving home with my wife without the trophy was really difficult,” Wood added. “We got a great winner in Alex [Noren] but I’ll be back next year trying to get the trophy back.”