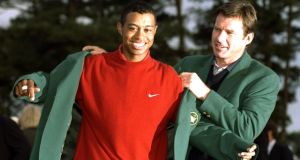 Nick Faldo presents Tiger Woods with his first Grreen Jacket after his 1997 win at the Masters in Augusta. Photograph: Stephen Munday/Allsport

In his career on the golf course, Tiger Woods has always appeared armour-plated. Time and time again, as he closed out a tournament, claiming 15 Major titles along the way, his aura was one of invincibility.

There was a steeliness, a fortitude that only the true sporting greats possess; but, away from such cosseted environments, his infallibility was only too apparent through various indiscretions and escapades that had him the centre of the story for all the wrong reasons.

That the so-called “Jaws of Life” – police parlance for hydraulic rescue tools – were used to extricate him from the wreckage of his car in California for this latest off-course headline act highlighted the seriousness of the single-car accident from which he required surgery for “multiple leg injuries” and the player’s injuries deemed “moderate to critical” but “not life threatening”.

The big question, though, is: could this be the end of Tiger Woods’s playing career?

For a man, the great survivor in so many ways, who has undergone no fewer than five major back surgeries, each comeback has brought with it a miracle of Lourdes feel, none more so than when he won the Masters in 2019. A year previously, having undergone spinal surgery, he had professed: “I’m starting to put the pieces together. I got a second chance on life, I am a walking miracle.”

Could this latest incident prove to be a step too far, even for him?

Woods – the dominant player of his era, with 82 wins on the PGA Tour and 15 Major championship successes – has been recuperating from back surgery performed pre-Christmas and, up to this car crash, had been uncertain about his exact return to competition but targeting the Masters at Augusta National in April which is now out of the question. Beyond that? Well, who truly knows?

While his brilliance as a golfer – according to Forbes magazine becoming the first billionaire athlete back in 2009 – was unquestioned, where he very much let his golf clubs do the talking, his legacy has been tainted by a number of scandals in his personal life that first surfaced in November 2009 when Woods crashed his Cadillac Escalade outside his Florida mansion. His wife of the time, Elin Nordegren, used a golf club to break the rear window of the car to help rescue an incoherent Woods.

The crash itself was only half of the story: the incident occurred shortly after National Enquirer magazine exposed that Woods had been involved in an extra-marital affair with a New York nightclub hostess and, over the following weeks and months, numerous women came forward alleging affairs with Woods. Within months, many of Woods’s main sponsors – Accenture, AT&T and General Motors among them – had ditch him, although Nike, his principle supporter, stood firmly by him. By August of 2010, Nordegren had divorced him.

Following that Thanksgiving crash of 2009, Woods had issued a statement asking for privacy: “Although I understand there is curiosity, the many false, unfounded and malicious rumours that are currently circulating about my family and me are irresponsible. The only person responsible for the accident is me.”

By the following spring, a contrite Woods confessed: “I was unfaithful, I had affairs and I cheated. What I did was unacceptable . . . I knew my actions were wrong but I convinced myself that normal rules didn’t apply.

“I never thought about who I was hurting, instead I thought only about myself. I thought I could get away with whatever I wanted to. I felt I had worked hard my entire life and deserved to enjoy all the temptations around me. I felt I was entitled, and thanks to money and fame, I didn’t have to go far to find them.”

Slowly but surely, Woods rebuilt his body and his game. But the road was never smooth, and in May 2017 the golfer – again fighting to regain fitness at the time following further surgical intervention – was arrested by police who found him asleep in his car, stationary in a traffic lane with the engine running.

A police toxicology report found there were five different drugs traced in his system – among them an opioid painkiller, an anxiety drug and a sleeping drug – and, in a deal which saw his driving under the influence charge dropped, Woods pleaded guilty to a lesser reckless driving charge and agreed to enter a diversion rehabilitation programme.

“What happened was an unexpected reaction to prescribed medications. I didn’t realise the mix of medications had affected me so strongly. I want to apologise with all my heart to my family, friends and fans. I expect more from myself too. I will do everything in my power to ensure this never happens again,” he said at the time.

This single-car crash in California comes just days after Woods hosted the Genesis Invitational on the PGA Tour, a tournament which supports the player’s endeavours in generating revenue for the Tiger Woods Foundation, a charity he founded which raises money to support health, education and welfare programmes for American youth.

Woods was unable to play in the tournament due to rehabilitating from his December spinal surgery . . . and this latest major crash will likely raise, with reported serious leg injuries, will place a question mark over whether this marks the end of his playing career?

John Horan: Gaelic games retain same status despite loss of Level 5 Covid exemption 12:09
Gatland considering Jersey as base for Lions ahead of series 11:24
LeBron James tells Zlatan Ibrahimovic: ‘I will never shut up’ 11:31
Michael Walker: Why Marcelo Bielsa is manager of the season so far 08:00
Matt Williams: Offloading skill has been obliterated from this Ireland attack 07:00
Here is your handy guide to sport on television this week