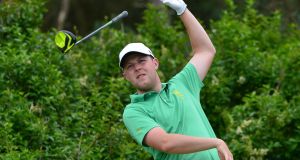 Paul McBride: was pipped in the quarter-final of the British Amateur Championship at Royal St George’s. Photo: Pat Cashman

Paul McBride’s hopes of British Amateur Championship glory were dashed yesterday with defeat by two holes at the hands of Englishman Harry Ellis in their quarter-final on the Kent coast.

The Dubliner was the last man standing for Ireland at Royal St George’s after compatriots Stuart Grehan and leading qualifier Caolan Rafferty both exited the competition on Thursday.

And things began well for the 21-year-old Walker Cup hopeful from the Island, as he birdied the opening hole to take an early lead and went two-up on the third as Ellis bogeyed.

Both players bogeyed the fourth but the match was all square again by the turn, as Ellis produced birdies on five and eight while also matched McBride’s birdie on the seventh.

Ellis then seized the initiative on the 10th with a birdie and it was a lead he would not surrender, while a fifth and final birdie from Ellis on the 12th gave him a two-hole advantage.

Both got a par on 13 and 14 before both bogeyed 15 and another bogey from Ellis on the 16th saw his lead reduced to just one hole with two to play.

McBride was certainly determined to make his opponent sweat and a par again for both on 17 set up a tense finale as the pair headed up the 18th – but a bogey finally ended McBride’s chances.

It also meant he was unable to try and better last year’s semi-final performance but this week –- where he also went further than any of his fellow Walker Cup squad members – will have done his chances of making that final 10-man Great Britain and Ireland team later this year no harm at all.

Meanwhile Ellis went on to defeat Italian Luca Cianchetti in the semis and will today face Australia’s Dylan Perry in the 36-hole final.