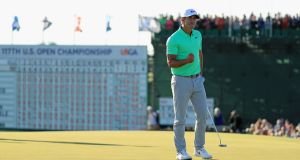 Brooks Koepka does things his way, very much his own man. And for a player who took that most un-American of decisions to develop his game elsewhere – in his case on the PGA European Tour – the American’s homecoming party was all the sweeter for the hugely impressive way he fashioned victory in this 117th US Open at Erin Hill.

On a blustery day which flustered so many, Koepka stayed cool, calm and very much collected to see off all-comers equal the lowest winning score to par in US Open history.

In finishing with a closing round for under-par, the 27-year-old Koepka – who had three successive birdies from the 14th hole to effectively seal the deal – finished with a 67 for 272, 16-under-par. It left him with four strokes to spare over runners-up Brian Harman and Japan’s Hideki Matsuyama, with Tommy Fleetwood a shot further back alone in fourth.

While Koepka – the seventh first-time Major winner in a row – stuck diligently to his game plan, others flattered only to deceive. Rickie Fowler (72 for 278) never managed to click through the gears. A day after signing for a 63, Justin Thomas (75 for 280) floundered. Matsuyama was put on the clock on the 15th but manfully managed a closing 66 for 276, superb scoring in the conditions, but he had started too far back, especially given Koepka’s masterful run for home.

Nope, this was Koepka’s time. For the man from Florida who took the road less travelled to reach his destination, he found his own destiny.

Starved of any playing privileges in the United States when he turned pro in 2012, Koepka played the Challenge Tour in Europe, graduated onto the European Tour and then progressed onto the PGA Tour in a career path that should provide lessons to other aspiring professionals. And by his side through it all has been his Northern Irish caddie, Ricky Elliott, who remained as cool as his boss in the heat of battle. “Stay aggressive,” became the mantra he used to Koepka throughout.

For most of the way, Harman was Koepka’s chief protagonist. But the back nine, just as it had been all through the tournament was Koepka’s domain, and playing alongside Fleetwood – a friend from his days on the European circuit – was also a help.

Although he suffered a three-putt bogey on the 10th – his only three-putt of the championship – Koepka took control coming in with birdies on the Par 5 14th, getting up and down from a greenside trap, the 15th from 12 feet and the 16th from 15 feet. Back-to-back bogeys for Harman on the 13th and 14th aligned the stars for Koepka.

A final round 73 for a three-over-par total of 291 left Shane Lowry in tied-46th but well off his intended objective, a final hole bogey leaving “a sour taste” in his mouth after he topped his fairway wood approach in attempting to reach the green on the Par 5 in two.

“To bogey the last is very disappointing. I really grinded hard today. It was so tough out there with strong winds and tough pin position. I suppose I did most things well all week and could be standing here in a different scenario, a different position, if I just had of got a few breaks and maybe holed some putts along the way. All in all, I suppose it’s a pretty decent week,” said Lowry.

“We all know Majors are different kettle of fish and it is tough golf. You play in the weekend of a Major and you know you are never too far away from a good week, I am playing nicely and I have got the French Open, the Irish Open and the Open coming up in the next month and then obviously the PGA after that, so I’ve a big couple of months coming up and I feel like my game is in decent condition.”

Lowry’s next outing will be the French Open in Paris, followed by the following week’s Irish Open at Portstewart.