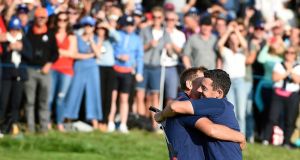 Rory McIlroy and Ian Poulter celebrate their win on the 16th hole during the afternoon foursomes at the Ryder Cup at Le Golf National in Paris. Photograph: Gerry Penny/EPA

From the depths of despair, a rescue mission was devised and executed. And how! On one of those wonderful sporting days which can defy logic, Europe were transformed from a team gasping for air into one where players pumped out their chests like superheroes.

From trailing the United States 1-3 after the morning fourballs, a history-making whitewash in the foursomes transformed the dominant colour from red to blue on the leaderboard for a 5-3 lead after an absorbing first day’s play in this 42nd Ryder Cup on the Albatros course.

Allez les Bleus and all that, because Thomas Bjorn’s wish of a united continent was vindicated. Europe rode the wave of a fourballs session in which they floundered, with the exception of the partnership of Francesco Molinari and Tommy Fleetwood, to surf back in a foursomes session unlike any other seen in the long history of the biennial match in which all four points were claimed in a momentum shift.

As Molinari sank yet another birdie putt to finish the day’s play on the 16th green to thunderous roars from the huge crowds, the sight of Phil Mickelson putting his arm around the shoulders of his captain Jim Furyk, gently patting him, was a symbolic one. Even with the task force et al, it seemed like nothing had changed at all for the Americans, even if their own salvage mission to win away has time to be performed.

As Thomas Bjorn observed, not letting his men lose the run of themselves, this is “a marathon”. The race has a long way to run yet.

But momentum is a truly powerful tool, and Europe defiantly claimed it with a stunning second session of play in which Molinari and Fleetwood – two points from two matches – were again brilliant in taking out the power pairing of Jordan Spieth and Justin Thomas.

To a man, each one of Bjorn’s men delivered. Rory McIlroy, so at odds with his game in the morning that he couldn’t have argued if he was benched for the foursomes, was invigorated in a pairing with Ian Poulter. Sergio Garcia’s poor form this season was ditched, in a strong pairing with Alex Noren. And Justin Rose and Henrik Stenson did what Justin Rose and Henrik Stenson do so well.

McIlroy’s transformation was perhaps the most dramatic of all. In an opening fourballs session where he could hardly find a fairway, never mind manage a birdie, he hit the range for a brief session during his sandwich break and re-emerged with a new sense of self-belief that, in tandem with Poulter, delivered one of those four foursomes points.

Even when trailing Bubba Watson and Webb Simpson by two after five holes, there was no pressing of panic buttons. The impetus for what would follow was delivered by McIlroy’s driving of the Par 4 sixth and, after Poulter left the eagle putt eight feet short, the Northern Irishman rolled in the birdie putt. It was like flicking a switch and discovering there was light available all along.

And what of McIlroy’s approach shot to the 13th? On a day of chip-ins, some of them outrageous, and on a day when Fleetwood’s long birdie putt in securing the only Europe point of the morning brought hope and a sense that not all was lost, McIlroy’s deliverance of a shot from the banks of the water hazard, with the ball below his feet, to within eight feet of the flag was like an act of true defiance.

That Poulter holed the birdie putt, to move them within touching distance of the win, only served to bring the eyes popping out of his own head and get him pumping his own chest in a way that has become his trademark. Vintage Poulter, and some vintage McIlroy – at last – too.

Of sticking to his gameplan and not even considering leaving McIlroy out of the foursomes, Bjorn explained: “I had a plan and stuck to it. That’s how I saw the matches. Great players, when they don’t perform to the standards that they want to, they have an ability to go and prove it to themselves. They want to put it right, and he did. I never have any doubt in Rory McIlroy. I believe in him, and it was great to see his response. But that’s more to do with him.”

The big winners for Europe were the partnership of Molinari, the British Open champion, and Fleetwood. The Italian is a man transformed, a different beast in the cauldron of the Ryder Cup since lifting the Claret Jug. At Celtic Manor in 2010 and Medinah in 2012, he walked away as a team winner but without winning any of his own matches. He was zero wins for six starting the day, but won two points from two. “He’s a force to be reckoned with in the world of golf,” said Bjorn.

It wasn’t just that Europe won all four foursomes in the second session to flip things around, it was the scale of it. No lucky bounces off the railway sleepers (as Tony Finau benefited on the 16th), nothing like that at all. The matches were won by three holes, then four, then five and again five. Momentum shifting wins that ensured Fleetwood went back to the hotel for his son’s first birthday with a tale or two to tell, and his team-mates were similarly emboldened.

One day down, two to go, Jim Furyk was left to muster his men, but intent on doing so. “We’ll figure it out. We’re going to make decisions that are best for our team, and our players are all on board for that. They want an opportunity to be in a position [on Sunday] to have a chance to win the Ryder Cup . . . and we will do anything needed to try to put ourselves in position,” said the US captain, who admitted the second session had left a “sour taste” among this team.

Playing catch-up, though, is always hardest.