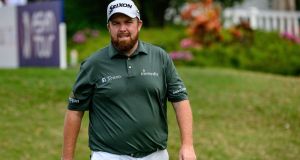 Shane Lowry has work to do heading into the final day of the Hong Kong Open, after he carded a third round of 68 on Saturday to leave himself six shots off the lead of Australia’s Wade Ormsby.

Lowry is one of seven players currently tied for ninth place in the Asian Tour’s curtain-raiser, after he failed to really ignite following Friday’s impressive 66.

Another birdie on the 15th suggested a strong finish but Lowry gave that shot back on the 17th, before signing for a two under par round of 68.

Meanwhile Australian Orsmby continued his affinity with the tournament as he added to his opening rounds of 65 and 66 with another 66 on Saturday.

Charoenkul has a two shot advantage over a group of four who are tied for third on nine under par on a congested leaderboard.

Lowry will be joined by America’s Tony Finau and Tomoharu Otsuki in Sunday’s final round, as he bids to reel in Orsmby.