Out of Bounds: Will sponsors support Mel Reid as a gay woman? 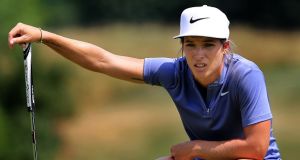 Mel Reid is a six-time winner on the Ladies European Tour and has played in the Solheim Cup for Europe on three occasions. Photograph: Getty Images

Mel Reid’s decision to publicly and officially come out as a gay woman is perhaps an indication of the journey that many LGBTQ sportspeople still face, but one of the reasons why she has waited until now - at the age of 31 - to go public provides further insight into the challenges faced.

Reid - a six-time winner on the Ladies European Tour and with a full LPGA Tour card stateside and has played in the Solheim Cup for Europe on three occasions - is a talented, high-profile player who is a sponsor’s delight . . . yet, one of the reasons she postponed going public on her sexuality, was a fear that it would affect her potential to attract corporate sponsors.

That says a lot, and it is to the English player’s credit that she has finally reacted.

As she put it, “I’ve just reached a point in my life where I feel like my true, authentic self. If my story helps one person, then I feel like it’s a good cause. I protected my sexuality for a long time because I though I had to in order to help my career and to get more sponsors. But then I started to wonder why these companies would want to sponsor me and have me represent them if I can’t be my authentic self?

“There is only one of you in the world and you have to have one life, so be the best version of yourself and be proud of who you are. That’s when you attract the right people around you to make you better, and ultimately happier. I’ve always fought for equality and I’m now at a point where I want brands to represent me for me. Ultimately, I feel like I’m on a platform where I can have some sort an influence. It’s just important to say to people that this is who I am. Hopefully, it will help a couple of young girls or boys.”

That point made by Reid about losing or failing to attract corporate sponsors because of her sexuality is a pertinent one; and that she aired it on the website Athlete Ally, for which she has signed up as an ambassador to promote gender issues, should have those who make such decisions in boardrooms shuffling uncomfortably in their leather seats.

Hopefully, the industry will take notice.