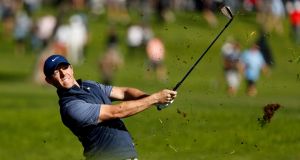 Rory McIlroy plays his approach to the second hole on the South Course during the first round of the the 2019 Farmers Insurance Open at Torrey Pines Golf Course in San Diego, California. Photo: Gregory Bull/AP Photo

Rory McIlroy failed to find a spark on the opening day of the Farmers Insurance Open at Torrey Pines as he and Tiger Woods were both left in the dust by a scintillating round from Jon Rahm.

McIlroy’s first competitive appearance at the San Diego layout comes off the back of a disappointing final round at the Tournament of Champions earlier this month and he will feel like he left plenty of shots out there on the South Course on Thursday on the way to a one under par round of 71.

For Woods it was a little more up and down but a similar result as he signed for a two under par round of 70 on the same South Course.

Woods has won this event – where the first two rounds are rotated between the North and South courses before the weekend reverts to just the South – a record seven times as well as claiming his 14th Major title at the layout in the 2008 US Open.

On Thursday he teed it up for his first appearance of the 2019 season and he did look somewhat rusty after playing only the Ryder Cup and the Hero World Challenge since his 80th PGA Tour win at the Tour Championship last September.

A bogey at the second was not the start the 14-time Major winner wanted but he found birdies at the sixth and the ninth to get under par for the day before a brilliant two at the 11th moved him within six of the lead at the time.

However, he lacked somewhat in consistency by dropping a shot at the next hole before finding another birdie at the 13th but then giving it back again at the 16th.

But Woods has better form than anyone on the Par 5 18th where he famously held that birdie putt to force a playoff with Rocco Mediate at the US Open 11 years ago and, on Thursday, it was the same result. A 12-footer into the middle for a birdie four putt the gloss on a round that threatened to be far worse.

For McIlroy there was some of the frustrations of last season as he watched a number of birdie putts roll just by the edge of the hole – picking up just two in the round at the third and the 18th while a single dropped shot came at the Par 3 16th.

McIlroy and Woods do both have the consolation of playing the easier North Course on Friday – something that Rahm, and a number of other players, took full advantage of on Thursday.

The Spaniard earned his first PGA Tour victory here two years ago and comes into this week off the back of a sixth place finish last week, a win at the Hero World Challenge in December and two more top-10s in his last four appearances.

The clifftop layout in La Jolla tends to be a bomber’s paradise and it proved so for Rahm on Thursday with winds down and the sun out. Starting at the 10th the 24-year-old flew out of the blocks with an eagle at his first hole before picking up two more birdies in his first six.

Another eagle followed at the Par 5 17th – his eighth – before he birdied the ninth to go out in just 29 shots. A bogey at the third was the only blemish on the Spaniard’s card and he answered it in style with four birdies in a row from the fifth to the eighth to complete a round of 62 and set the target at 10 under.

Hot on his heels is world number one Justin Rose who, playing with new equipment since switching from Taylormade to Honma, also made the most of his round at the North Course by carding seven birdies and an eagle on the way to a round of 63 for nine under. He was joined at that mark by American Doug Ghim while three-time Major champion Jordan Spieth shot a much needed round of 65 to sit a further two shots back.

Séamus Power’s bad start to the season – which has seen him miss six out of seven cuts so far – showed no signs of improvement as he slumped to a four over par round of 76 on the North Course.

1 Andy Sullivan fights back tears as he wins English Championship
2 Ranelagh man at home with himself, his scar and old cue
3 Liverpool to sign Olympiakos left back Kostas Tsimikas
4 Canned clapping at the Crucible? It’s weirder it’s getting
5 ‘Embarrassment, anger, sadness’: the decline of the great Stephen Hendry
Real news has value SUBSCRIBE

Liverpool to sign Olympiakos left back Kostas Tsimikas 20:06
Andy Sullivan fights back tears as he wins English Championship 19:34
Celtic drop their first points in quest for 10-in-a-row 18:58
Ben Stokes to miss rest of Pakistan series due to family reasons 17:09
Alfredo Morelos and Rangers ease past St Mirren 17:06
Here is your handy guide to sport on television this week