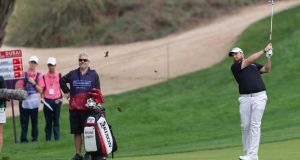 Shane Lowry takes his second shot on the 14th hole during the round one of the Dubai Desert Classic. Photo: Neville Hopwood

Shane Lowry’s good form which saw him claim victory in Abu Dhabi last week continued in the opening round of the Omega Dubai Desert Classic on Thursday where the Offalyman carded a three under par round of 69.

Matt Fitzpatrick claimed the outright lead at seven under on a day of low scoring thanks to a brilliant burst over the final holes.

After last week’s win Lowry has moved back inside the world’s top 50 and can now work his schedule around the bigger worldwide events, starting with this week in Dubai and next week in Saudi Arabia.

After making a birdie at the third Lowry slipped up with back-to-back bogeys at the fifth and sixth but then responded strongly on his final 10 holes.

A birdie at the ninth, another at the 13th and then back-to-back birdies to finish at the 17th and 18th saw him break 70 and sit in a tie for 31st, four shots behind Fitzpatrick.

On shot further back is Paul Dunne who will rue a disappointing finish after moving to four under par. The Greystones man missed the cut in his first outing of the season last week but came out firing at the Emirates Golf Club on Thursday morning with four birdies and just a single bogey in his opening nine holes moving him to three under.

Two more birdies and another bogey left him four under with two to play but consecutive bogeys on his closing two holes resulted in a round of 70 and two under.

That leaves Dunne five behind Fitzpatrick who birdied five of his last six holes to card an opening seven-under-par 65 and finish a shot ahead of an eight-strong group which included former Masters champion Sergio Garcia, world number five Bryson DeChambeau and England’s Callum Shinkwin.

Lee Westwood, Ian Poulter and defending champion Li Haotong were among nine players a shot further back as 74 players in the 132-man field broke par.

Fitzpatrick’s 65 was his lowest opening round since the 2015 British Masters at Woburn, an event he went on to win to claim the first of his five European Tour titles to date.

“It was obviously a great finish to the round,” Fitzpatrick said. “A couple of things that I’ve been doing in the off-season looked to have paid off a little bit.

“I added a bit of extra length to my driver so it’s given me a few yards to help get on in two on the last (the par-five 18th) because I’ve never been able to do that. And then just wedging it a lot better has given me a few more chances coming in.”

Fitzpatrick made a successful defence of his European Masters title in Switzerland last year and finished 12th in the US Open, but was otherwise disappointed with his 2018 campaign.

“I’m not going to lie, I was really disappointed with my season last year,” added the 24-year-old, who feels he is “lucky” to have won a battle for the services of veteran caddie Billy Foster after his split with Lee Westwood.

“Second in Hong Kong kind of saved it a little bit at the end of the year there, but I knew a lot of things needed to change. I needed to work on different parts of my game, different shots, and really did feel like I put in a lot of work over the winter to be honest.

“And so far I’ve played five rounds this year and have played pretty well for all of them. Hopefully it continues but it’s just nice to see it pay off.”

Shinkwin defeated Fitzpatrick in the final of the English Amateur in 2013 but is still searching for his first European Tour title and lost his card at the end of 2018 by just €7,014 after finishing 119th on the Race to Dubai.

That meant the 25-year-old had to qualify for this week’s event by winning a 36-hole qualifier, having done the same to earn a place in the field in Abu Dhabi last week.

“I’ve been here for the last two years so it almost feels like it’s the same,” the world number 311 said after a 66 containing five birdies and an eagle. “But qualifying makes it a little bit more draining. Playing six, seven days on the trot is hard on the body and the mind.

“But winning also helps anyone. If you win, you feel more comfortable straightaway. Even if it’s just a qualifier, it feels great.

“I think I’ve found the equipment that works for me. That’s been the trouble the last two years mainly, as well as a few things last year which are personal. But the game feels great. It’s felt great for the last two or three months, and then now I’m finally showing what I can do.”