Rory McIlroy three shots off the pace in Switzerland 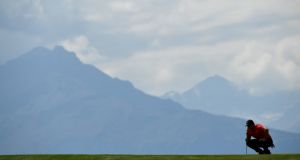 Rory McIlroy lines up a putt on the seventh hole during the first round of the Omega European Masters at Crans Montana Golf Club in Switzerland. Photograph: Stuart Franklin/Getty Images

Fresh from his $15 million windfall at the Tour Championship last Sunday, Rory McIlroy eased himself into action on his return to the European Tour at the Omega European Masters at Crans Montana in Switzerland.

The 30-year-old opened with a birdie on the 10th hole and carded five more in a three-under 67 that left him four shots off the pace.

Austria’s Matthias Schwab and Mike Lorenzo-Vera of France lead the way after they both carded seven-under-par rounds of 63.

Schwab had set the target in the morning with a bogey-free effort before Lorenzo-Vera came home in 29 to join him at seven under par.

The 34-year-old Frenchman took a five-week break to get married and move house and put some of his success down to the mental side of his game after taking a share of the lead after the first round.

“I’m very happy because I just had five weeks off. It was a stressful five weeks with a wedding and moving plus two kids. I managed to bring the head together pretty well today.”

Lorenzo-Vera has already had two second-place finishes this season and has spoken of how his work with a psychologist has helped him get closer to that elusive first victory.

He continued: “The best thing to do [with so much going on] is to have a very, very good psychologist, that you call often. I’m not kidding, that’s really what I do.

“Try to clean the head as much as possible outside the tournaments and come here fresh and ready to play golf.”

The 34-year-old birdied the second but double bogeyed the fourth after an unfortunate bounce before hitting back with birdies on the seventh, ninth and 10th.

A gain on the 13th was then followed by a long putt for eagle on the par 14th, a birdie on the second of the back-to-back par fives and another gain after a slippery putt on the 16th.

Earlier, Austria’s Schwab birdied the fourth – via a bunker shot – fifth, seventh and eighth, and a chip helped set up a birdie on the par-five ninth as he turned in 30.

Another gain on the 13th put him two clear and a two-putt birdie on the 15th moved him to seven under.

“It reminds me of home a lot,” he said. “I grew up in the mountains and still live there. I like being here, I like the mountains.

“I don’t know if growing up at altitude is an advantage, you still have to hit shots and play good shots.”

Lorenzo Gagli, Mikko Korhonen and Sebastian Soderberg were the pair’s closest challengers a shot back, one clear of a group of six players including Tommy Fleetwood, Jamie Donaldson and David Drysdale.

Sergio Garcia was in a group of 11 three shots off the lead on four under par.

Pádraig Harrington (71), Paul Dunne (73) and Gavin Moynihan (73) are all over par and will need to make a big improvement to make the weekend cut.

LEADERBOARD
(British and Irish unless stated, par 70, (a) denotes amateur)