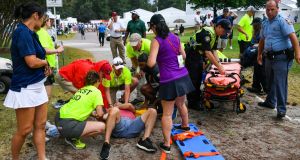 Spectators are treated after a lightning strike injured six people during the third round of the Tour Championship golf tournament in Atlanta. Photograph: AP

An Irish man is among the six golf fans injured in two lightning strikes at the East Lake Golf Club during the third round of the Tour Championship on Saturday night.

The Department of Foreign Affairs said it was aware of the case and was providing consular assistance to his family.

The condition of the Irish man is unclear. Unconfirmed reports said that he was conscious and speaking after the incident.

The PGA Tour said the injuries suffered by the fans “do not appear to be life threatening”.

Players had been removed from the course at 4.17pm with lightning in the vicinity. As is typical, spectators generally remained on the grounds. A Tour statement explained what transpired next.

It read: “At 4.45pm there were two lightning strikes at East Lake Golf Club; a tree near the range/15 green/16 tee was hit and debris from that strike injured four people.

“EMT [Emergency Medical Technicians] tended to those fans and two others immediately and transported them from the property via ambulance for further medical attention. Our latest report is that their injuries do not appear to be life threatening.”

The decision was made that competitors would not return to the course, with play to resume at 8am on Sunday. Stark damage to the bark of a tree hinted at the severity of the strike.

The Tour added: “The safety of our fans, players and partners is of the utmost importance,” but eyebrows were raised at the insistence of standard late afternoon play for the tournament leaders with storms featuring heavily in weather forecasts.

The PGA Tour’s vice president of rules and competitions, Mark Russell, defended the third-round timings. “We had a situation where there were pop-up thunderstorms,” he said. “We have a meteorologist on staff. We can monitor that. And a lot of times we get lucky and we don’t get hit with thunderstorms, especially when it’s a situation when they’re pop-ups like that.

“Now, that’s what we were faced with. We can suspend play and get people out of here if that does happen, but a lot of times we’re on the positive side hoping that we can play golf and get lucky and not be in the path of those thunderstorms.”

When pressed on why fortune was even an element, he added: “I think if we did that [amended starting times] every time we had a possibility of thunderstorms in the south-east, we’d do that basically every time we played golf.”

This event, the conclusion to the PGA Tour season which affords $15 million to the winner, had been delayed for 90 minutes on Friday because of nearby lightning.

This is the first time the Tour Championship has been played here in August, a month ahead of its previous date.

The PGA Tour does not issue attendance figures but Saturday’s crowd was clearly the largest of this tournament week, as Justin Thomas, Rory McIlroy and Brooks Koepka sat atop the leaderboard. Thomas will take a one-shot lead over McIlroy and Koepka into Sunday, when he will restart his third round on the 6th green.

When the players were taken off the course, American Justin Thomas was at the top of the leaderboard at 12-under-par, even on his scorecard through five holes on day three.

Northern Ireland’s Rory McIlroy was on 11 under, one over for the day after a bogey at the first, while Koepka dropped shots at both the first and third holes to also be in a tie for second place. – Guardian/Agencies