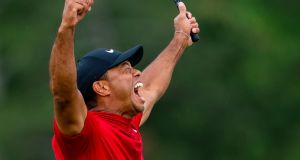 Tiger Woods’s rehabilitation continues with the news that he will receive the Presidential Medal of Freedom in a ceremony next week at the White House.

The medal is one of the highest civilian awards in America, and Woods will be only the fourth golfer to receive one. The other are Arnold Palmer, Jack Nicklaus and Charles Sifford, the first African American to play on the PGA Tour.

Woods will receive the award from Donald Trump, who is a long-time friend and business partner of the golfer. Woods pulled off one of the great revivals in sporting history last month when he won the Masters, ending a decade-long drought without a major. Many believed his career was over after a series of serious injuries.

Last month, Trump tweeted that he intended to give Woods the medal after his victory at the Masters. “Spoke to @TigerWoods to congratulate him on the great victory he had in yesterday’s @TheMasters, & to inform him that because of his incredible Success & Comeback in Sports (Golf) and, more importantly, LIFE, I will be presenting him with the PRESIDENTIAL MEDAL OF FREEDOM!,” wrote Trump.

Trump and Woods have golfed together regularly, the last time in February alongside Jack Nicklaus. Woods has been reluctant to discuss politics, and his friendship with a man unpopular among African Americans has received some criticism. Last summer, Woods was asked whether he agreed with Trump’s policies “He’s the president of the United States. You have to respect the office,” Woods said. “No matter who is in the office, you may like, dislike personality or the politics, but we all must respect the office.”

Woods will join a distinguished list of athletes who have received the Presidential Medal of Freedom. They include Jackie Robinson, Muhammad Ali, Billie Jean King, Babe Ruth and Guardian columnist Kareem Abdul-Jabbar. – Guardian