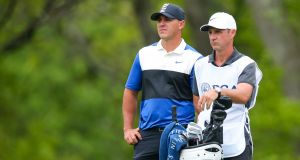 Brooks Koepka with his caddie, Ricky Elliott, during the final round of the 2019 PGA Championship on the Black Course, Bethpage State Park, in Farmingdale, NY. Photograph: Joshua Sarner/Icon Sportswire via Getty Images

They twist and turn in a person’s head and, on occasion, there comes a time when even the greatest of dreamers realise the futility of the pursuit. They adapt. They change course.

When Ricky Elliott reached the fork in the road, aware that his own dream of being a tour professional was no longer attainable, that he simply wasn’t good enough, he went for the next best thing: caddying.

But even that decision can slap a man in the face. There are a lot of very good caddies who never get to sniff the rarefied air of contending in a Major. There are many who have never managed to carry a winning bag in a Major. Elliott, a son of the Causeway Coast, is only too aware that fate can sometimes deal you a hand that can change everything.

Elliott answered the call, unsure at first of what awaited

Next week, further history beckons. He’ll be by Koepka’s side for the US Open at Pebble Beach where he’ll chase a third straight win in the championship. And, next month, he will be on familiar terrain as the American chases the Claret Jug at Royal Portrush, Elliott’s home turf.

“Nothing he does surprises me anymore, to be honest,” said Elliott. “His place in the game now is in stone. He goes out there and thinks that.”

Koepka’s rise from Challenge Tour player to four-time Major champion is a remarkable tale in its own right, yet Elliott’s story too is a compelling one. It is one of a former Irish boys’ champion, who headed to Toledo University with the dream of one day chasing titles of his own, ultimately changed career direction to be the on-course bagman/psychologist/comforter/friend.

“It’s incredible. Brooks is one of my best friends and to be able to walk down the last hole and watch him winning Majors, to be right beside the number one player in the world winning four Majors is a dream come true,” admitted Elliott in the aftermath of that back-to-back Wanamaker Trophy success last month in Bethpage.

That friendship has evolved, brokered to some degree by the involvement of Graeme McDowell. Elliott and G-Mac grew up together playing the Valley Course at Royal Portrush, two peas in a pod.

When one and then the other moved stateside, the two remained in touch as they chased their golfing dreams. McDowell found his level among the very elite, Elliott tried but sank to the mini-tours and the reality of life on a rocky road and where next to turn.

“I tried the teaching thing. I tried playing. I tried every other aspect to golf, but I really loved the competitive side and the gamble of going out there and playing. If you miss the cut, you go home. I love the competition of golf and if you can’t do it yourself, this [caddying] is the next best thing. So it is nice to be in the fortunate position to caddie for somebody who is so good. I have enjoyed every minute of it.”

It was McDowell who suggested Elliott to Koepka’s swing coach Claude Harmon when he was looking for a caddie ahead of the 2013 US PGA at Oak Hill.

At the time, Koepka was one of those then rare breeds, an American playing on the Challenge Tour in Europe. Koepka made it into the PGA field through his world ranking but his usual caddie wasn’t able to make it to upstate New York. The search led them to Elliott.

Elliott answered the call, unsure at first of what awaited. But on the range and out on the course in the practice days, Elliott – caddying for the first time in a Major – knew he’d stumbled onto something special.

“There was just something about him. The first practice round we played, I just thought, ‘this guy is the real deal’ . . . there was something that was different about him.”

Koepka made the cut that week (finishing in tied-70th, some distance behind the winner Jason Dufner) and, on the Sunday night, asked Elliott if he would stay on his bag. Koepka had won three times on the Challenge Tour by the end of June, which meant he graduated onto the main European Tour. Elliott hooked up permanently and the rest, as they say, is history.

Next week, Koepka will go in search of a third straight US Open, a feat only achieved by Scotland’s Willie Anderson in the sport’s fledgling professional days

The rest of 2013 brought them to Scotland, Wales, Switzerland (their only top-10, in the Omega European Masters), Netherlands, Italy and the season rounded off in Scotland. It was a flavour of what would follow.

In 2014, Koepka’s upward trending in the world rankings meant he got invitations to play on the PGA Tour while a tied-third finish in the US Open provided a glimpse of his Major potential. The season finished with Koepka winning the Turkish Airlines Open, on the European Tour, but come 2015 he was a PGA Tour player and his schedule – and thus Elliott’s – was primarily a stateside one.

What Koepka has managed to do better than any other player in the past two years has been to bring his A-game to the Majors. Elliott has been with him step-by-step.

“Every decision I make is bounced off my caddie. Everything we do on the golf course, it’s a decision I might make; or sometimes he has got to pull the reins back and be like, ‘listen, you need to hit to the centre of the green, there’s no need to go at this flag’. And he’ll kind of exaggerate it a little bit how bad it’s going to be if I go at the flag, stuff like that,” said Koepka of their player-caddie on-course dialogue.

In fairness to Koepka, he gives credit where it is due to those around him. Harmon. Pete Cowen. Elliott.

“It’s a team effort. Everyone’s grinding, trying to make sure I am playing the best I can, to have a good game plan and attack the golf course the way I should. And once it comes to Thursday, it is just me and Ricky. That’s it, the only two people who can do anything.”

When the US Open was last played at Pebble Beach in 2010, Koepka was a student at Florida State and Elliott was at home watching on television as his friend McDowell was the last man standing to lift the trophy.

Next week, Koepka will go in search of a third straight US Open, a feat only achieved by Scotland’s Willie Anderson in the sport’s fledgling professional days. Anderson won in 1903, 1904 and 1905, the first and only hat-trick of wins. Curtis Strange, a winner in 1989 and 1990, finished tied-21st in his bid to make it three-in-a-row.

After Pebble Beach, the next Major challenge will bring Koepka for a first ever competitive event in Ireland. That it will be the 148th British Open at Royal Portrush means Elliott will be steering him through familiar terrain.

“I have played [Dunluce] it a lot growing up, but Brooks hits the ball a lot different to me and the lines I hit are a little bit different. I will have to work on the yardage book a little bit for Brooks playing it. Obviously, a little local knowledge doesn’t hurt. There are going to be a lot of friends out. Brooks has a big following in Portrush because of me. He will be well supported.”

But first up is Pebble Beach. Chasing a shared dream.