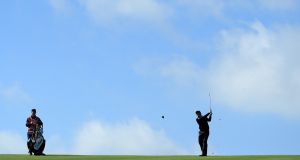 Ireland’s Paul Dunne is watched by his caddie Darren Reynolds as he plays his second shot on the 17th hole during the first round of the Made in Denmark at Himmerland Golf & Spa Resort in Aalborg, Denmark. Photograph: Andrew Redington/Getty Images

Paul Dunne and Michael Hoey both made strong starts to the Made In Denmark event on Thursday, both opening up with rounds of three -under 68 to lie two shots off a busy leaderboard.

Dunne has had a lean time of late on the European Tour but a fine first nine holes after he started from the 10th saw him reach the turn in four-under 68, with a hat-trick of birdies coming from the 14th hole.

Dunne made the first of two bogeys on third hole, and would add a further birdie and a bogey in his 68.

Hoey included a double-bogey and an eagle, as well as three birdies, after also starting from the 10th and he joined Dunne in a tie for 11th spot on three under.

Gavin Moynihan also made it to three under after three birdies on the back nine, but he endured a horrible homeward run, making three straight bogeys from the first hole to move back to level par. A double-bogey on the par-five fifth and a bogey on the seventh saw him sign for a three-over 74.

Defending champion Matt Wallace is just one shot off the lead after the first round of the , despite feeling “jaded” by his recent exploits.

Wallace finished second in the British Masters a fortnight ago and within a few hours was on his way to New York for the US PGA Championship at Bethpage, where he finished in a tie for third behind Brooks Koepka and Dustin Johnson.

The 29-year-old Londoner had no time to celebrate his best result in a Major championship as he flew straight to Denmark to defend the third European Tour title he won in 2018, but showed no ill effects with an opening 67 at Himmerland Golf & Spa Resort.

“Three different ways of playing but all three we’ve had a lot of wind so getting out there relatively early was nice, to get four birdies on my front nine to start the tournament was good,” Wallace said.

“I’m a little bit jaded so might take this afternoon off but we’re in good shape.”

Less than four years ago Wallace was finishing fifth in a tournament on the Alps Tour to climb to 1,672 in the world rankings, but the following year won six times on the same circuit and has recorded four European Tour victories in the last two seasons.

His performance at Bethpage lifted him to a career-high 25th in the world rankings and Wallace added: “It’s going in the right direction. I’m working hard for it, it’s not like it’s just come randomly.

“There’s more bits that I want to work on, there’s bits I want to improve at. There’s a long way to go for the rest of the year and I haven’t won yet so it’s important to me to try and get that and try and do that this week.”

Scotland’s Robert MacIntyre, who finished runner-up at the British Masters alongside Wallace, also lies a shot off the lead after a 67.

LEADERBOARD
(British and irish unless stated, par 71, (a) denotes amateur):