Leona Maguire shoots the lights out with 64 in Dubai 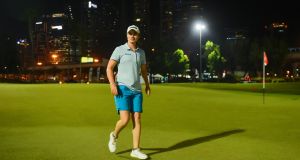 Leona Maguire of Ireland smiles after her last putt on day one of the Omega Dubai Moonlight Classic at Emirates Golf Club. Photograph: Tom Dulat/Getty Images

Talk about shooting the lights out, literally! In an historic first ever round of a Ladies European Tour event played under floodlights, Leona Maguire – the 24-year-old Co Cavan golfer who is juggling tour cards on both the LET and the Symetra Tour stateside – shot a course record 64, eight-under-par, to grab the lead in the Omega Dubai Moonlight Classic.

Playing on a sponsor’s invitation, Maguire – ranked 237th in the world rankings – had nine birdies and a lone bogey to claim a two strokes lead over Germany’s Olivia Cowan with Spain’s Nuria Iturrios, who currently leads the LET order of merit after her victory in Morocco last Sunday, a shot further adrift in third.

“I guess I just need to play at three o’clock and then in darkness: that’s the way to go for me,” quipped Maguire of her stunning round, which gave her the outright lead in the first-ever floodlit tournament played on any of the main professional circuits.

Maguire, a longtime owner of the world number one spot in the world amateur rankings, turned professional last June after completing her psychology degree at Duke University in the USA. She claimed her first professional victory when winning the Windsor Classic in California on the Symetra Tour last month and has continued that form since crossing multiple time zones to play in Morocco last week and now in Dubai.

Just over half of Maguire’s round was completed in daylight, with the final five holes completed under floodlights on the Nick Faldo-designed course for her lowest round as a professional. “I adjusted quite quickly, actually,” said Maguire of the difference between playing in regular sunlight and then under the LED lighting system which is an integral part of the course design.

“It was a lot better than I thought. The lights went on when were we on 13 and 14, which were a little tricky and then I played the last four holes really nicely. It seems like night golf suits me. I thought it was great. I can’t really complain. A course record . . . and I really enjoyed it!”

Maguire finished in style, sinking a 25-footer for a birdie on the 18th. “It was my longest putt of the day,” admitted Maguire, who had holed long putts for par on the first and second holes. After those early par saves, a birdie putt on the Par-5 third, which had almost five feet of break, got her birdie blitz going.

On the Par-3 seventh, Maguire was inches away from a hole-in-one (which would have won her an Omega watch) but she tapped in for the birdie. “It was a real mix of nice putts and tap-ins, which makes it that little bit easier,” she admitted.

Leona’s twin sister Lisa was forced to stay in her shadow. Lisa, also playing on a sponsor’s invitation, opened with a three-over-par 75 to lie in tied-43rd but in position to make the cut.

Cowan, a 23-year-old from Hamburg, shot a bogey-free round 66 that featured four birdies in her opening five holes. “It’s a good score and it was really weird coming in in the dark. It’s a thing that you have to get used to, but it was fun . . . it was hard judging your distances. I thought pitching was difficult but it is a really cool thing and I’m glad that we have this event.”

(British and Irish unless stated, par 72):

1 Tipping Point: DeChambeau’s transformation raises questions, but who will ask them?
2 Monica Seles: The warrior queen who could have been the best ever
3 Ken Early: Resurgent United can be the top team – in Manchester
4 Hatton you heard, it’s Tyrrell’s time despite DeChambeau’s dominance in Detroit
5 All in the Game: Dugarry apologises to Messi for ‘half autistic’ jibe
Real news has value SUBSCRIBE