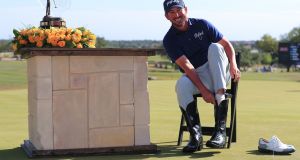 Andrew Landry built a big lead and held on for his first PGA Tour victory, a two-stroke triumph at the Texas Open in San Antonio on Sunday.

Texas-born Landry, who lives in nearby Austin, birdied the first three holes after starting the day tied for the lead with fellow American Zach Johnson.

In his 32nd start on tour, Landry parred the final seven holes to finish at 17-under 271 at TPC San Antonio while Trey Mullinax and Sean O’Hair tied for second on 15 under.

Mullinax’s hopes diminished when he chunked a pitch shot at the 17th hole, failing to clear a bunker between his ball and the hole.

The resulting bogey gave Landry the gift of a two-shot lead heading to the par-five 18th.

Ireland’s Graeme McDowell shot a final round 74 to finish level par overall and down in a tie for 51st.