Future Ryder Cup looks to the Manor born for Adare 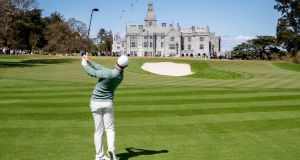 Rory McIlroy in action at Adare Manor for the launch of the 2020 JP McManus Pro-Am on Friday. Photograph: Morgan Treacy/Inpho

Rory McIlroy didn’t have a Green Jacket, unfortunately. But this wasn’t about regrets at missing out on that precious fashion item at the Masters; on a gloriously sunny day at Adare Manor, the four-time Major champion brought his prodigious driving to officially open the re-designed course by the River Maigue and to provide a glimpse of what lies ahead in the coming years when the venue will test the world’s elite.

In 2020, the JP McManus Pro-Am tournament – with an ambition of raising over €40 million for charitable and sporting causes in the south-west – will take place and perhaps serve as a test-run of sorts for a possible staging of the 2026 Ryder Cup, a venue for which has yet to be decided.

This year’s Ryder Cup will staged in Paris in September, with the next one in Europe scheduled for Italy in 2022. With construction work yet to start on the proposed Marco Simone course in Rome, there had been talk on tour of Gleneagles or Adare Manor possibly coming in as a replacement venue.

However, Keith Pelley, the chief executive of the PGA European Tour, who attended Friday’s JP McManus Pro-Am launch – which featured a match between McIlroy and Paul McGinley against Pádraig Harrington and Shane Lowry – refuted any suggestion of the match not taking place in Italy as scheduled: “I’m not sure where that rumour has come from. Italy have been wonderful partners to date, we’re now in the finalising stage of determining the design led by European Golf Design.”

Adare Manor, though, is a realistic candidate venue to play host to the Ryder Cup in 2026. The resort owner JP McManus said: “we have put our name in the hat, we’d love to have it. I think we have the facilities to host it . . . it is every golf course owner’s hope to get the Ryder Cup. I am sure it will cost plenty. I would like to bring it to Ireland, like to bring it to Limerick, like to have it in Adare and give the whole south-west a boost.”

Former Ryder Cup captain McGinley – who is on the board of the European Tour – knows the process that must be followed. “First, and most important, it is an Irish bid. It is not a JP McManus bid, it is a bid we need to get the government onside,” said McGinley.

“The government have indicated they will support it, which is very important in any country, like Italy, where it will be in a few years time; France where it is this year. I think we are on the right track and fingers crossed it would be a great venue showcasing Ireland. Nothing is ever simple, not just straightforward off you go, there is huge competition out there.”

The process to determine the venue for 2026 won’t officially start until after this year’s Ryder Cup in Paris.

“I think we have fiduciary responsibility to consider all options and what’s best for the European Tour and for the Ryder Cup . . . after this Ryder Cup, we’ll look at our options. We have fiduciary responsibility to our board, players and fans and to the world of golf to chose the best venue for the most iconic event in the world,” said Pelley, who also said that prospective venues would need to be “tested and trialled”.

The JP McManus Pro-Am event – which will be held on July 6th-7th, 2020, running up to the British Open at Royal St George’s – will fit that bill, while it is feasible that the DDF Irish Open could also break away from its seaside links agenda to perhaps return to Adare Manor in 2021 or 2022.

McIlroy – who has acted as tournament host for the Irish Open, a role he will share in turns going forward with McGinley, Harrington, Darren Clarke and Graeme McDowell – said: “I have been a big advocate for the Irish Open to be staged on a links golf course, and I feel that is very important at that time of the year, but if I were to make an exception to that rule this would be the place where it would go, [especially] given that Adare Manor is a potential Ryder Cup venue.”

Certainly, those spectators who attended the charity match involving the four Irish professionals were given a taste of what the future holds: in glorious conditions, the fourball better-ball teams shot scores of 68, four under, to share the €500,000 purse for charity. Lowry donated his to Temple Street Children’s hospitals, the others to their charitable foundations.

And there is a piece of advice from Pro-Am host McManus to those wishing to attend the event in July 2020. “Get your ticket early, there is a limit to the number we can let in,” he said. Over 80,000 fans attended the last hosting of the Pro-Am in 2010.

Tickets – in the form of a specially designed golf caps – are now on sale from www.jpmcmanusproam.com

1 Australian rugby staring into abyss as another crisis hits
2 Six Nations rugby needs to be protected for terrestrial TV
3 Garry Ringrose to stay with Leinster as he signs two-year central contract
4 Dr Claire Molloy: ‘It is a privileged place to be, on the frontline’
5 My favourite sporting moment: Game, set and couch as Borg takes down McEnroe
Real news has value SUBSCRIBE