Koepka fully fit again and looking forward to the fray 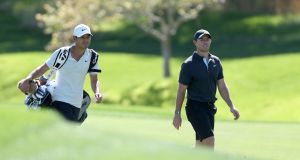 Four-time Major winner Brooks Koepka is confident the injuries which made him “play like crap” are behind him as he returns to competitive action.

The world number 11 has had a two-month break during which time he had stem cell therapy injections in his left knee and a cortisone injection in his hip.

He will tee it up again this week at the CJ Cup, an event usually staged in South Korea but because of the coronavirus pandemic it now forms part of October’s Las Vegas Swing.

“It’s the whole reason I played like crap,” said Koepka, who missed the FedEx Cup Playoffs and the US Open as a result.

“I’ve got my body squared away, feels a lot better. I didn’t know how bad I felt until I actually feel good. It’s nice to be back.

“Memorial [July] was kind of its peak of when it was at its worst, and then at the PGA [in August] it didn’t feel great, obviously just progressively kept getting worse.

“I did another round of PRP [platelet rich plasma] therapy about three weeks ago on my knee and then I had a shot in my hip at Boston.

“It’s [the hip] not a full tear, but there’s definitely a tear there. If cortisone doesn’t work and it actually gets worse, it will be surgery and you’re out for nine months.

“But everything feels good. It’s the best I’ve truly felt in so long, I didn’t realise last year how limited I was from swinging. I really do feel great right now.

“I know physically I’ll be able to walk four rounds and have no issue with it, From there, it’s just go out and win.”

While Koepka is back in the field, alongside the likes of Rory McIlroy, Justin Thomas, Jon Rahm and newly-crowned BMW PGA Championship winner Tyrrell Hatton, there is no place for world number one Dustin Johnson who had to . withdraw after testing positive for Covid-19.

“Obviously, I am very disappointed,” he told pgatour.com.

“I was really looking forward to competing this week, but will do everything I can to return as quickly as possible.

“I have already had a few calls with the Tour’s medical team and appreciate all the support and guidance they have given me.”