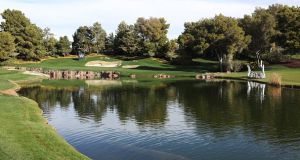 The course: Shadow Creek Golf Course - 7,527 yards Par 72 - is a Tom Fazio design at the upmarket resort in Las Vegas. Opened in 1989, the course played host to the much-hyped Tiger v Phil money match back in 2018. With nearby mountains serving as an aesthetic backdrop, and an abundance of trees at odds with the desert landscape, the course is in Golf Digest’s top-100 American courses. The feature hole is the picturesque Par 3 17th, which has a carry over water to a green complex framed by trees.

The field: Dustin Johnson’s withdrawal after testing positive to Covid-19 deprives the tournament of the world number one, while Bryson DeChambeau has opted to leave the event off his schedule as he sets his sights on next month’s Masters tournament. The limited-field - just 78 players - nevertheless features a stellar line-up with five of the world’s top-six playing, while Jon Rahm has a chance to leapfrog DJ back to the world’s top spot with a win or runner-up finish. Brooks Koepka, troubled by a knee injury, is back for his first competitive appearance in two months.

Quote-Unquote: “I have a hard time believing I’m going to play much more aggressive than I already do. It’s not like I’m uber-conservative by any means” - defending champion Justin Thomas on retraining an aggressive course strategy at Shadow Creek, where the rough is dormant at this time of the year.

Betting: In-form Matthew Wolff - on a hot streak with runner-up finishes in each of his last two outings at the US Open and the Shriners Hospitals Open - looks decent value at 16/1 to finally get a W onto his CV for the year. While Harry Higgs looks a tempting each-way value bet at 200/1.

The course: Fairmont Links at St Andrews Bay is a resort course located three kilometres outside the historic golfing town. The Torrance Course - 72,30 yards Par 72 - was designed by former Ryder Cup captain Sam Torrance with input from Gene Sarazen and is a links which has served as a final qualifying venue for the British Open (in 2010) and also hosted the Scottish Seniors Open.

The field: The marquee group features veteran Lee Westwood, home favourite Robert MacIntyre and recent Scottish Open champion Aaron Rai. South African JB Kruger earlier this week became the second player to fail a test for Covid-19 since the European Tour’s resumption and was forced to withdraw from the tournament.

Betting: Matt Wallace, the world number 51, carries the favourite’s mantle into the tournament in his bid for a first win of the season and looks well priced at 10/1. Each-way value can be found with the 50/1 odds of Calum Hill.