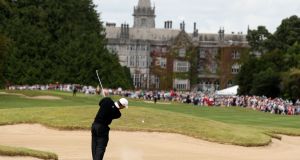 Put your caps away for another 12 months as, perhaps inevitably, the JP McManus Invitational Pro-Am tournament, scheduled to take place at Adare Manor, Co Limerick, in July has become the latest event to be postponed due to the ongoing Covid-19 global crisis.

With a stellar field assembled - with world number one Rory McIlroy and his fellow Irish Major champions Shane Lowry, Pádraig Harrington and Graeme McDowell committed to play, along with Tiger Woods, Jon Rahm and Brooks Koepka - for the sold-out event, the tournament host JP McManus and organisers have deferred its staging until July 5th and 6th 2021.

“We are all very disappointed with this news and we would like to thank everyone involved with the Pro-Am for their understanding and patience. To all ticket holders: please hold onto your ticket caps and we look forward to seeing you in 2021 for what promises to be an exciting tournament of world-class golf,” said McManus.

The tournament - a hugely significant fundraiser for charities in the Irish Mid-West region with over €140 million raised in previous stagings - was first held at Limerick Golf Club in 1990 and most recently at Adare Manor in 2010. Apart from attracting the world’s leading professional players, it has also featured stars from the sports, film and music world with jockey AP McCoy, actors Samuel L Jackson, Hugh Grant and singers Nicky Byrne and Niall Horan among those playing.

This year’s event was pencilled in ahead of the Scottish Open and the following week’s British Open, but it was most likely to fall the way of the Open (due to be stage at Royal St Georges) which was cancelled and put back a year by the R&A in a decision on Monday.

Although not a part of the PGA European Tour, the JP McManus Pro-Am has been run with the support of the tour. The effects of the coronavirus crisis have led to a large number of cancellations and postponements on the European Tour, with the Dubai Duty Free Irish Open scheduled for Mount Juliet in May among those postponed.

This latest edition of the JP McManus Pro-Am was a sell-out event, but spectators in possession of those caps (which act as tickets) will be able to use them for the rescheduled 2021 event, as will all on-site parking and Park & Ride passes.

“We would also like to convey out gratitude to the European Tour for their continued support of the event. We hope everyone will stay safe during these unprecedented times,” McManus added in a statement.

The tournament has proven to be hugely popular with players and spectators alike in its five previous stagings: Roger Chapman won the inaugural tournament in 1990 while Richard Boxall and Paul Broadhurst shared the honours in 1995. By 2000, it had moved up a level with Tiger Woods claiming the honours, again at Limerick Golf Club. Having raised €1.2 million and €4 million respectively on the first two tournaments, Tiger’s year saw that charitable amount jump to almost €20 million.

By 2005, when it moved to Adare Manor, Pádraig Harrington’s success provided a glimpse into the future. Two years later, he would win the Irish Open on the same course ahead of his leap forward to becoming a three-time Major champion. That first staging at Adare Manor raised over €31 million.

Last held in 2010, the tournament attracted most of the world’s top players - Woods joined by the likes of Adam Scott, Dustin Johnson, Henrik Stenson and Ian Poulter - as Darren Clarke emerged as the winner. The amount raised that year came to over €43 million.