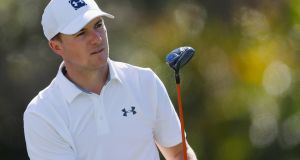 Jordan Spieth will make his first start of the year at the Sony Open in Hawaii at Waialae Country Club. Photo: Kevin C. Cox/Getty Images

Former world number one Jordan Spieth will keep his expectations low ahead of his first competitive appearance in 2019 in the Sony Open in Hawaii.

Spieth reached the top of the rankings in August 2015 and was second at the end of 2017, but has slipped to 17th after a disappointing year by his standards, which included failing to convert a share of the 54-hole lead into a second successive Open title following a closing 76 at Carnoustie.

By failing to qualify for the Tour Championship at the end of a first winless season on the PGA Tour since 2014, Spieth did not play the requisite 25 events and was supposedly subject to a “major penalty” and fine.

However, after coming to an agreement with the PGA Tour, that effectively translated to Spieth contesting two low-profile events in Las Vegas and Mexico in November, where he finished 55th and missed the cut respectively.

“I like this golf course, you can kind of think your way around and as far as attitude goes just keep it light, recognise that it’s the first tournament of the year,” Spieth, who was ineligible for last week’s winners-only Tournament of Champions in Maui, told Golf Channel at Waialae Country Club.

“I’m trying to get a feel for tournament golf. I haven’t played a lot of rounds over the last couple of months. I’m working on some things, it’s progressing, and just got to come out with a lot of trust here but most importantly keep the light mood, keep the expectations lower to start.

“It’s a course where I’ve had some success before so even without my best stuff I feel I can contend, but I like where my game is at right now and I like this course for what I’m working on.

“I’m trying to take what I did last year statistically and find the weak points. A lot of work on the putter and try to get back to the putting I expect from myself.

“Ball-striking wise I had a lot of strong suits but certainly some weak points as well.

“Every year it’s about finding where I was down the year before and try to work that back up. Each part of my game at some point in my career has been the best in the world, so I know that I’m capable of getting each part of my game to that level, which is reassuring.”