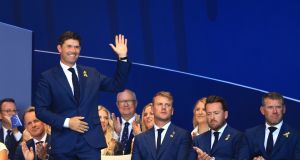 Europe vice-captain Pádraig Harrington is introduced during the opening ceremony for the 2018 Ryder Cup at Le Golf National on in Paris. Photograph: Andrew Redington/Getty Images

An inkling of white smoke emerging from the conclave, perhaps? With a Ryder Cup press conference called for the Wentworth Club outside London next Tuesday, the signs are that confirmation of Pádraig Harrington’s captaincy of the European team to defend the trophy at Whistling Straits next year will be rubber-stamped.

Not that the Irishman will be punching the stamp too hard. It has emerged that Harrington sustained a broken bone in his wrist following “a simple slip” in the middle of December, which will delay his return to the competitive circuit by a number of weeks, missing out on a planned playing return in the Middle East – in Abu Dhabi and Dubai – and, instead, rescheduling for a return to action at the Pebble Beach Pro-Am in February.

It also means Harrington has some extra time to get his head around the fact that finally all the speculation about the captaincy of the European team for the 43rd Ryder Cup match in Wisconsin on September 25th-27th, 2020, can be sorted and Harrington – set to become the third Irish captain of the team in the last four matches – can get on with the job at hand.

Harrington, a six-time player for Europe, has served as vice-captain for the last three matches and emerged as a raging hot favourite to succeed Thomas Bjorn following the emphatic victory over the United States in Paris last September.

At the time, European Tour chief executive Keith Pelley insisted there were a number of other strong candidates for the captaincy – “Three max,” claimed Pelley – but many of Europe’s leading players, among them Justin Rose and Rory McIlroy, quickly threw their weight behind Harrington while Lee Westwood, considered a potential candidate, ruled himself out in favour of the Dubliner.

Among those to back Harrington was Graeme McDowell, a fellow vice-captain under Bjorn in Paris, who opined: “He sees all the angles. He’s calculating. He has that analytical brain that dots all the ‘i’s and crosses all the ‘t’s.”

Harrington has made no secret of his desire to be a captain at Whistling Straits, on a course which will have many similarities with European-style courses. Given the timing of the match in Wisconsin, for example, the green speeds will have to be kept slower than the norm stateside. In serving his time as player and vice-captain, Harrington’s time has most likely come to be confirmed next Tuesday at the famed course in the Surrey stockbroker belt.

Of his captaincy under Bjorn, Harrington admitted: “You are always learning, and it was a nice balanced vice-captaincy with different personalities; some good emotions, some good thinkers.”

Although 47 years of age, Harrington – who enjoyed a strong finish to the European Tour – has managed to combine playing on both the PGA Tour and the European Tour in recent years. However, his accident prior to Christmas, which he initially thought was a sprained wrist, has turned out to be more serious and will delay his return to competition.

Originally scheduled to play the Abu Dhabi Championship in a fortnight’s time, Harrington’s injury diagnosis has forced him to delay playing until the Pebble Beach Pro-Am in February.

In a statement, he explained: “Over the Christmas period I discovered that I had broken a bone in my wrist. I had slipped whilst walking down the stairs at home in mid-December. Whilst it continues to heal, I need to keep it in a splint a little while longer so, frustratingly, I will need to miss the first two planned events of my season in Abu Dhabi and Dubai. However, I should be fully fit for the AT&T Pebble Beach Pro-Am in early February.”

On Twitter, he added some light-heartedness to his plight by joking, “if only practicing your putting all winter would make you a better putter.”

Harrington is set to become the third Irish captain of the Europe team in the last four stagings of the match. Paul McGinley successfully captained Europe at Gleneagles in 2012 while Darren Clarke lost out on American soil at Hazeltine in 2014. McGinley and Clarke were among those in a five-man committee to select the captain for Whistling Straits.