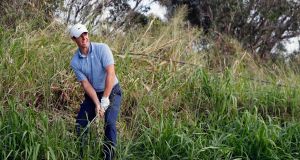 Rory McIlroy plays a shot during the final round of the Tournament of Champions at Kapalua in Lahaina, Hawaii. Photograph: Kevin C. Cox/Getty

Once something becomes a habit, it can be hard to break.

That’s the bind Rory McIlroy has found himself in, time and time again this past year when paired in the final group in the final round of a tournament. How to get the job done? Or not!

On no fewer than six occasions in 2018, the Northern Irishman was positioned in the final pairing (not always leading, admittedly) going into the final round only to come up short each time. On Sunday, in the Tournament of Champions in Hawaii, in his season-opening event, that trend continued as McIlroy was forced to take a back seat.

McIlroy put it down to being, “one of those days.”

And perhaps it was, except such conclusions have become a recurring theme dating back to the two tournaments in the Middle East last January – in Abu Dhabi (where Tommy Fleetwood leapfrogged him on the final day) and in Dubai (where Haotong Li out-duelled him down the stretch) – and also through last summer, where places like Wentworth, Akron and East Lake produced a version of Groundhog Day.

Rather than dwelling on any possible link to his final round of travails, McIlroy – who closed with a final round of one-under 72 for tied-fourth, incidentally the only player in the top-20 not to break 72 with Xander Schauffele’s 62 stealing the show and the title from the grasp of 54-hole leader Gary Woodland – returned to his home in Florida citing the “positives” of his first outing of the year.

Those positives included unleashing a new driver, a new ball and, perhaps most interestingly of all, a new putter.

“The driver performed really well, the ball was great. I think, myself, this week I showed a little more versatility in my game. I was hitting different shots. Left to right, right to left, high to low. Some things I wasn’t maybe quite as comfortable doing last year. So, overall, it’s been a positive week even though I wish I would have played a little better.”

He added: “I’m going to go home [to Florida] and sort of reflect on what was good and maybe what wasn’t so good and work on a few things and come back out having learned a little more about my game than I knew coming into this week.”

McIlroy is as yet unsure when he will play again.

McIlroy is definitely playing in the Genesis Open in Riviera next month and will most likely add in another tournament before then. He has a number of options. The Farmers Insurance at Torrey Pines is one possibility. Or the Phoenix Open? Or, even, the AT&T Pebble Beach Pro-Am. It’ll be his own call.

A fourth-place finish would be snapped up by the majority of players on tour, but McIlroy’s eyes are on wins (his last victory came at the Arnold Palmer Invitational last March) and he has set his stall out to focus primarily on the PGA Tour but, especially on the four weeks of the Majors, this year.

“It was nice to get a start in this early and see where my game’s at and definitely something to build and improve on,” said McIlroy, who remains eighth in the latest world rankings.