Rory McIlroy makes a solid start to 2019 campaign in Hawaii 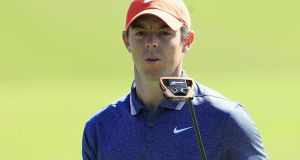 Rory McIlroy opened with a 69 in the Tournament of Champions in Hawaii. Photograph: Sam Greenwood/Getty

Rory McIlroy made a solid start to his 2019 campaign after he shot a four under par round of 69 on the opening day of the Tournament of Champions in Hawaii.

He is three strokes off the lead of American Kevin Tway, who set the pace with a 66 in Kapalua.

Tway’s compatriots Gary Woodland, Justin Thomas and Dustin Johnson are his closest challengers, a stroke back on six under par.

Tournament debutant McIlroy made five birdies and a single bogey during a pleasing return to action, picking up three strokes in his final four holes to put himself in early contention.

Meanwhile Tway’s blemish-free round included seven birdies in what is his first appearance in the winners-only event after earning his first PGA Tour title at the Safeway Open in October last year.

The 30-year-old, son of eight-time PGA Tour winner Bob Tway, picked up shots early on the second, third and fifth holes before holing back-to-back birdies just before the turn and closed with further gains on the 15th and 16th.

Woodland had eight birdies and two bogeys to leave him on six under alongside Thomas and Johnson, who both bogeyed the sixth.

After an eagle on the par-five 5th, Australian Marc Leishman hit a double-bogey on the 17th to card a five-under 68.

Collated first round scores in the USPGA Tour Sentry Tournament of Champions (USA unless stated, Par 73):