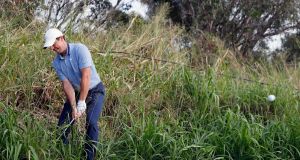 Rory McIlroy of Northern Ireland plays a shot on the 14th hole during the final round of the Sentry Tournament of Champions at the Plantation Course at Kapalua Golf Club in Lahaina, Hawaii. Photo: Kevin C. Cox/Getty Images

A subdued Rory McIlroy said he would remain patient after another disappointing final round scuppered his chances of victory at the Sentry Tournament of Champions in Hawaii on Sunday.

The four-times major champion, playing for the first time on Maui, seemed ideally placed to put the heat on overnight leader Gary Woodland but once again failed to deliver in the final pairing, a one-under 72 the worst score of the top 10 finishers at Kapalua.

Xander Schauffele, who flew under the radar until an eagle at the ninth, slipped through for victory and his course record-equalling 62 was 10 strokes better than McIlroy’s round.

“My attitude was much better today. I didn’t press at all, I was very patient,” McIlroy told reporters after finishing equal fourth on 15-under-par, eight strokes behind Schauffele.

“I obviously could have shot a better score, but I did what I wanted to do, gave myself plenty of chances, just couldn’t get the ball to drop.”

McIlroy, who has decided to focus on the PGA Tour this year, a decision which ruffled some feathers in Europe, has struggled to convert opportunities to victories.

He played the final round of the first major of 2018 with eventual winner Patrick Reed at the Masters but faded to finish equal fifth.

He was beaten each time.

“It’s just something I am going to have to persist with, keep putting myself in these situations,” he said on Sunday.

“I don’t think anyone could have lived with Xander today.”

Schauffele equalled the course record with an 11-under-par 62 after starting the final round five strokes behind overnight leader Woodland and fell further back with a bogey at the first.

But two eagles – the second from 105 yards at the par-four 12th – and eight birdies catapulted the American to his fourth victory on the PGA Tour, his second in a couple of months after winning the WGC-HSBC Champions in Shanghai in late October.

Schauffele finished at 23-under 269, and then watched from the scoring trailer as Woodland missed a 10-foot birdie putt at the par-five 18th that would have forced a playoff.

“It was a crazy day,” Schauffele told Golf Channel.

“I started off poorly, chipped in (on the par-five ninth) and then holed out shortly after that.

“I knew it was going to be a birdie-fest coming in. I got nervous coming down the stretch but I was able to pull off some shots.”

None of those shots were better than the 200-yard approach he fired into the green at the par-four 17th, the hardest hole on the course, before reading the breaking nine-foot birdie putt perfectly .

The 25-year-old hit a similarly impressive approach at the last, a fairway-metal from 270 yards that he drew into the heart of the green before two-putting from 12 feet.

All four of his victories have been achieved playing the final round from behind.

“I’m definitely freed up,” he said. “The next step is to go wire-to-wire, have a lead and maintain it.

“I have no idea what really works for me yet. This is only my third year out here. I can’t tell you what the winning formula is.”

Woodland shot 68 and had to settle for second on 22-under.

“I’m playing great,” he said. “Frustrated right now but Xander played great, hat’s off to him. This one will sting tonight but we’ll regroup.”

Collated final round scores and totals in the Sentry Tournament of Champions, Plantation Course at Kapalua, United States of America (USA unless stated, Irish in bold par 73):