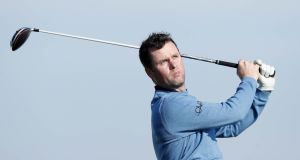 All three Irish survivors into the business end of the European Tour Qualifying School made upward moves in the fifth round of the marathon affair, with 35-year-old Ulsterman Jonathan Caldwell – a former Walker Cup teammate of Rory McIlroy – edging into the all-important top 25 with one round to go at Lumine resort in Spain.

With Denmark’s Benjamin Poke continuing to lead the way, but with his lead reduced from four to one stroke over his nearest pursuer Sami Valimaki of Finland, it proved to be a productive day’s work for the Irish trio in pursuit of a full European Tour card next season.

Caldwell – who plied his trade on the EuroPro Tour this season, effectively the third division in Europe where he finished seventh on the order of merit – shot a fifth round 69 featuring three birdies and a bogey on the Lakes course. He finish on nine-under-par 348, and moves up five places into a share of 25th place.

An even bigger move was made by Dubliner Niall Kearney, who also played on the EuroPro Tour this season. Kearney ran into a late run of form on that circuit – featuring three successive top-25s, including a fourth place finish in the PDC Championship – and has continued in that vein at Q-School where a bogey-free fifth round 67 for 349 jumped him up 28 places into tied 33rd and within touching distance of breaking into the big time.

Kearney’s bogey free round saw him claim birdies at his opening two holes, the 10th and 11th, and then add back-to-back birdies on the third and fourth.

For Gavin Moynihan there was also some upward movement as he signed for a 69 for 351 to moved into tied 47th. Moynihan started on the 10th and was level par through the turn before bookending his homeward run with birdies on the first and ninth.

Poke shot a fifth successive sub-70 round when he signed for a 69 in the penultimate round to reach the 90-hole mark of the marathon on 18-under-par 339, a shot clear of Valamaki, with tour veteran SSP Chawrasia and Adrien Saddier one shot further back.

The leading 25 players and ties after the final round earn tour cards to the European Tour for next season, while those who miss out will have the consolation of a place on the Challenge Tour.