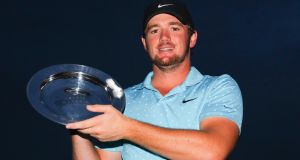 Sam Horsfield of England after winning the Celtic Classic at the Celtic Manor Resort. Photograph: Getty

Sam Horsfield, the Englishman with the American twang, is one of the few people making the most of 2020, after the 24-year-old held firm with a bogey-free final round 67 for a total of 18-under-par 266 to claim the Celtic Classic at Celtic Manor, his second title in three weeks on the European Tour.

A protege of Ian Poulter, who has been a significant influence on his fledgling professional career, Horsfield – ranked 219th at the start of the year – moved into the top-80 in the world rankings and also secured an exemption into next month’s US Open at Winged Foot in New York.

In adding the Celtic Classic title to the Hero Open he won just three weeks ago, Horsfield, who had limped over the line on that occasion, showed calm and composure for a two strokes winning margin over Belgian Thomas Detry.

Horsfield completed the job in near darkness, after a two-hour afternoon thunderstorm delay proved one of the few obstacles to his quest for victory. Once he let his clubs do the talking, though, there was no stopping Horsfield: he started the day one shot shy of Scotland’s Connor Syme but an impressive front nine, which featured three birdies, on the third, fourth and seventh holes, enabled him to take control of his own destiny.

The win took Horsfield to the top of the UK Swing (and guaranteeing his ticket to Winged Foot, with the top-10 on that mini-order of merit following this week’s Wales Open earning spots) and also into the top-10 on the Race to Dubai points list. While he showed nerves late on before completing his win at Hanbury Manor to secure his breakthrough European Tour title, Horsfield showed great character in closing the deal on this occasion highlighted by a superb up-and-down from greenside rough on the 17th where he sank a 12 footer for par to remain bogey free.

“My goal this weekend was to have no bogeys and I was able to do that, made that huge putt on 17 to keep it alive. I just played solid all week . . . I never felt nervous or uncomfortable, because I was in this position two weeks ago, but on 15 we decided to lay up because there is so much trouble around that green. That birdie on 14 gave me a pretty easy decision on the [15th] tee,” said Horsfield.

It proved to be a hugely disappointing final round for the two Irish men who survived the midway cut, with Cormac Sharvin – on course for a top-10 finish at the start of his round – suffering a triple bogey on his fourth hole which rocked him and he ultimately signed for a 73 for 276, which meant he dropped 22 places from his starting position down to tied-31st.

Jonathan Caldwell also endured a tough day, with the Co Down man signing for a 72 for 278 which left him in tied-47th position. Both Sharvin and Caldwell will remain in Newport to play in this week’s Wales Open, also on the Twenty Ten Course at Celtic Manor.

On the PGA Tour, Shane Lowry completed a final round 67 for a total of 12-under-par to edge into the top-25 at the Wyndham Championship and in a position to extend his season by qualifying for the FedEx Cup play-offs. Lowry started the week in 131st on the points list, with the top 125 after the Wyndham moving forward to the Northern Trust, the first of the play-off series.

Séamus Power, however, failed in his bid to break into the qualifying number. The Waterford man’s fighting closing round 66 for 270 earned him a place in the top 30 at the Wyndham but wasn’t sufficient to propel onwards to the Northern Trust in Boston.

Johnny Watterson on John McClean; McIlroy frustrated despite good play in Florida 07:05
Connacht make seven changes as they seek to extend winning run 06:00
Carbery’s return the major subplot as Munster visit Cardiff 06:00
Ireland will be looking for that clinical edge in Rome, says Farrell 06:00
Jacob Stockdale to be unleashed as Ulster target win over Ospreys 06:00
Here is your handy guide to sport on television this week