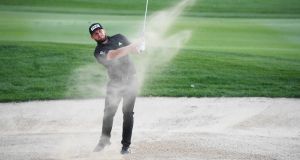 Tyrrell Hatton’s self-deprecating starring role in a European Tour humorous depiction of angry young golfers – which went viral on various social media platforms – was at odds with the cool, calm and collected manner in which the Englishman stole the show on the second day of the megabucks Abu Dhabi HSBC Championship on Friday.

Although fading light brought his performance to a premature end, Hatton – currently ninth in the official world rankings – took a grip on the €6.6 million tournament with a stunning display, five under on his round through 13 holes, that moved him five strokes clear of his nearest pursuers. Hatton stood at 12 under for the tournament after 31 holes.

Rather, Rory McIlroy was the one entitled to play the role of grumpy young man. In stark contrast to his smooth-swinging and magical putter show of the first round, the Northern Irishman – seeking to follow up his opening round 64 and getting off to a flying start with two birdies in the first three holes of his second round – paid a heavy price for some errant drives off the tee, most notably running up a double-bogey six on the fifth where he pulled his tee-shot left into trees.

McIlroy’s up-and-down second round featured three birdies, three bogeys and that double-bogey for the 14 holes he completed, which left him in that chasing quartet of players – alongside Jason Scrivener, Jazz Janewattananond and Romain Langasque – on seven under.

Having started his round with a birdie on the tough par-four first, where he was unhappy with his approach shot over signage only for it to finish four feet from the hole, and then add a further birdie on the third, McIlroy seemed out of sorts and suffered a bogey on the fourth and then that bad double-bogey on the fifth to put himself on the back foot. A birdie on the eighth brought some respite before a poor drive on the par-five 10th into trees led to a bogey and then poor recovery from a greenside bunker on the 13th led to another dropped shot.

Hatton has managed three eagles so far in the European Tour’s season-opening event – two in his opening round, another on the second hole of his second round – and included a run of four successive birdies, from the seventh to the 10th, that saw him pull away from McIlroy.

“I’m obviously in a great position at the moment,” said Hatton, who confessed his short-game wizardry had surprised him: “It’s been weird. The last three weeks I’ve been hitting balls again, I was mainly focusing on the long game. It’s a little bit of surprise to see my short game as good as it has been over the last two days but obviously I need that to continue over the next however many holes we’ve got left. But, yes, I’m very pleased.”

Hatton – a three-time winner of Rolex Series tournaments, most recently at the BMW PGA Championship last October – too showed his resolve with a number of par-saving putts late on to “keep a bit of momentum going”.

Shane Lowry never recovered from a ruinous triple-bogey seven on the ninth in his opening round, and added a second-round 70 to his 75 for a one-over-par 145, destined to miss the cut when play is completed Saturday morning. Graeme McDowell added a second 72 for a midway total of 144, dicing with the cutline.

One of the biggest moves of the second day was made by Tommy Fleetwood, who was three over through 11 holes of his first round when play was halted due to darkness but, on his return, found four early-morning birdies in seven holes to sign for an opening 71 and then continued that momentum into the second round to shoot a bogey-free 67 to reach the midpoint on six-under 138, in sixth position.

“I did things a lot better. Did what we discussed in my golf swing and drove it really, really well and that made such a big difference in the wind. I was driving it really well. Hit some great irons, holed out really well; didn’t really give anything away. So it was a much better day, really,” explained Fleetwood of his overnight improvement.

British and Irish unless stated, par 72, round suspended due to darkness with 64 players still to complete their rounds