Different Strokes: DeChambeau planning to bulk up some more ahead of Masters 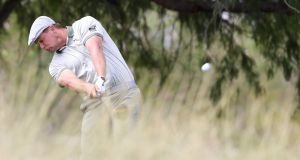 US Open champion Bryson DeChambeau’s quest to push the boundaries in golf technology will likely see him hit as many as 2,000 drives between now and next month’s deferred Masters tournament at Augusta National.

Although he has scheduled in a pre-Masters practice round at the iconic venue, DeChambeau – who closed out his competitive build-up with a tied-eighth finish behind Martin Laird in the Shriners Hospital Open in Las Vegas on Sunday – has vowed to tinker with new equipment, add more mass to his body frame and hit thousands of driver shots as part of his preparations.

“I’m going to be training pretty hard and getting myself up to hopefully around 245 (lbs; 111kg; 17½ stone), something like that, in weight. It’ll be the first time I’ve ever done that, so I’m going to be consuming a lot and working out a lot . . . I’ve got some equipment stuff coming, that’s mainly why I’m taking [time] off.

“I feel like the advantages I have could be much improved upon with the equipment. We don’t have it yet, but we’re diligently working on it behind the scenes. I’ll have that in a couple of weeks, we’ll prototype and test it and see if it works. If it doesn’t, we’ll go back and tool it and hopefully have it ready for Augusta.”

Among the plans revealed by DeChambeau is to use a 48-inch shaft in his driver, which is the longest permitted by golf’s governing bodies, the R&A and the USGA.

Rather than stage two regular events back-to-back when the European Tour makes its maiden visit to Cyprus next month, the tour has come up with an innovative concept to keep players’ thinking outside the box.

Although the Cyprus Open will be a straightforward 72-holes strokeplay tournament on the Aphrodite Hills course on October 29th-November 1st, the following week’s Cyprus Showdown will be a ground-breaking new format which will see the leading 36 players and ties survive a midway cut and then 16 and ties advancing onwards following another cut after the third round.

The twist? All scores after each cut will be reset in an attempt to get players to play aggressive golf and to go chasing the flag to survive. “We need to try new things for golf, to try and attract new fans and players . . . with two tournaments back to back in the same place, [the Showdown] should offer something a bit different,” said Chubby Chandler of ISM, the tournament promoters.

Geoff Loughrey’s reputation as one of the country’s leading golf coaches was further embellished with the Northern Irishman recording a one-two by his pupils in the AIG Irish Close: Royal Dublin’s Hugh Foley was a runaway winner of the championship at Rosapenna, while Roganstown teenager Patrick Keeling finished in a tie for second. “Geoff has been bringing us up here for the last four years, so I know this track really well. It’s definitely an advantage,” observed champion Foley.

“I guess I was unconsciously nervous before going to sleep, so I set my alarm 30 minutes later than I wanted to. I found out when I left this morning” – Sei Young Kim on mistakenly arriving to the course at Aronimink later than planned for her final round of the KPMG LPGA Championship, where the 27-year-old won her breakthrough Major championship. The South Korean finished with a 63 for 14-under-par 266, five shots clear of runner-up Inbee Park. Leona Maguire finished in tied-65th.

“#weddingsoff #toiletgate” – Tyrrell Hatton having a good old laugh on social media after his fiancée slammed a portaloo toilet door while in the middle of his backswing during the BMW PGA Championship at Wentworth.

“Thanks to @EuropeanTour for another great week at Wentworth. Was strange not having the fans there but next year! Well done to @Tyrrell Hatton the hooded legend from Marlow (I’m from Oxford so I don’t wear hoodies) on another great win” – Eddie Pepperell tips his cap to Hatton.

“It’s a crazy game, eh. A couple of weeks ago I missed a very short putt on the last green at Pebble Beach to miss out on a spot in a playoff . . . and this weekend I make a 40-footer on 18 to win. Figure that one out! – Ernie Els after winning the SAS Championship on the Champions Tour.

Annika Sorenstam appeared invincible heading into the Mobile LPGA Tournament of Champions only to find she wasn’t: having won the Williams Championship, Safeway Classic and Samsung World Championship in each of the previous three weeks, the Swede headed into the event in the hottest form of her career.

But Sorenstam’s streak was brought to an end, with South Korea’s Se Ri Pak – herself enjoying a standout season – who claimed a fourth win of the year with a final round 66, which featured four straight birdies on the back nine, for a 20-under-par total of 268 to ultimately win by four shots from Carin Koch and Scotland’s Catriona Matthew. Pak became the first player in the tournament’s history to retain the title.

Q
Player A’s drive has been pulled left, close to an out-of-bounds line up the left-hand side of the hole. He announces his intention to play a “provisional ball” and duly does so. On arriving to his first ball, he discovers it is clearly lying on the out-of-bounds boundary line and he would be required to stand in the out-of-bounds area in order to play a shot. Is he entitled to play the ball?

A
Yes. Under Rule 18.2, a ball at rest is out-of-bounds only when all of it is outside the boundary edge of the course. A ball is deemed in bounds when any part of the ball lies on or touches the ground or anything else inside the boundary edge or any other part of the course. He can disregard the “provisional ball” and continue to play his original ball as his second shot.