From purses to TV ratings: How Tiger Woods changed the face of golf 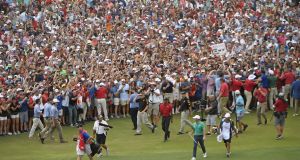 On the day after Tiger Woods won the Masters tournament at Augusta National in 2019, completing one of the greatest comebacks following injuries of any sportsman in history, a bespectacled, grey-haired man stood atop a desk in his company’s headquarters.

“Ahhhhhhhhhhhh…….,” he roared, pausing briefly before emptying his lungs as would a male soprano: “We love Tiger Woods!!” his voice reaching a crescendo.

Dan Murphy, the CEO and President of Bridgestone Golf, had good reason for such an outpouring of adulation.

Whatever about his personal fondness for the golfer, it was with a business head on his shoulders that Murphy recognised the impact Woods’s win, the 15th Major title of his career but the first since 2008 after being plagued with knee and back injuries for much of the decade, would have on the company’s investment in the player.

The uplift in sales wasn’t confined to Bridgestone either, with TaylorMade - the clubs Woods used since Nike pulled away from club manufacturing in 2016 - also seeing significant increases, all part of the so-called “Tiger Effect” which again demonstrated how the player, more than any other, had the capacity to move the dial.

Bridgestone moved swiftly to capitalise on Woods’s win: packs of a dozen golf balls were pushed into retail, all with “TIGER” stamped on the side of each ball and featured a commemorative wrap with the player with his fists in the air after his Masters success.

If there were some in the golf industry who questioned Bridgestone’s and TaylorMade’s moves to get Woods on board back in 2016, with no guarantee of him regaining fitness, the following years only served to demonstrate how the player’s influence on the sport remained unparalleled. The coverage of that 2019 Masters on US television was the highest in over a decade; but, then, Woods more than anyone has been the one who changed the TV game for the entirety of golf, his arrival onto the scene resulting in greater TV contracts and resulting in big increases in tournament purses.

An indication of Wood’s impact on television ratings had actually been shown the previous year. When he contended in the 2018 US PGA Championship, ultimately finishing runner-up to Brooks Koepka, CBS network recorded a 69 per cent increase on the previous year’s championship and its highest viewership since the 2009 PGA where again Woods was in the mix, losing out to YE Yang on that occasion.

Indeed, when Woods won the Tour Championship at East Lake in Atlanta in 2018 - with record crowds in attendance - the TV ratings for the final round increased by 206 per cent on the previous year’s figures.

That “Tiger Effect” has been apparent since Woods broke onto the scene in the late 1990s and his presence in the field of a tournament has traditionally impacted TV viewership. Neal Pilson, the former president of CBS Sports in the United States, once estimated that Woods contributed to a 30 to 35 per cent ratings increase when he played.

On the ground, too, that effect was shown in terms of ticket sales at tournaments. And Woods’s decision to play or not in tournaments had consequences too: it has been documented that, since 1996, a number of tournaments (among them old events, such as the Chrsyler Classic of Tucson which dated back to 1945) fell off the schedule. The list includes the Buick Open, the US Bank Championship, the BC Open and the Walt Disney World of Golf Classic (which ran from 1971 to 2012).

A noted contributory factor to each of these tournaments falling away from the schedule was that Woods - even before injuries led to a more limited playing schedule - rarely included them in his playing itineraries. If Woods wasn’t playing, title sponsors were less inclined to part with the big bucks.

Woods, almost single-handedly, was responsible for the huge injection of money into the sport after his arrival onto the tour scene in 1996. Unquestionably, his fellow players benefitted hugely, not just in terms of prizemoney –Tony Finau, for instance, has won some $18 million in prize money without winning a tournament since the 2016 Puerto Rico Open – but also in endorsement deals, the scale of which increased on the back of Woods’s emergence as a global sports star.

Rory McIlroy, on the eve of this week’s WGC-Workday Championship and just days after Woods’s car crash which left him with severe leg injuries, spoke sincerely of his friend’s impact on the game: “I feel like we should pay tribute to him every day for being on the PGA Tour and what he’s done for golf.”

In monetary terms, in television ratings and in club and golf ball sales, the “Tiger Effect” has been unparalleled in the sport.

In speaking of the hope that Woods can, yet again, overcome his injuries to return to play, Keith Pelley, the chief executive of the European Tour, said: “If he were ever to tee it up again, the ratings would be off the charts . . . . he has had such a broad and inclusive appeal, we all owe Tiger a tremendous amount.”

Long before he ever got around to teeing up in a tournament here, Tiger Woods regularly used visits to Ireland to prepare for the British Open by playing some of the country’s iconic links courses.

Woods first started visiting in 1998 - when invited by businessmen Dermot Desmond and JP McManus - with the late Payne Stewart, Mark O’Meara and Lee Janzen among his travelling companions in combining fishing with golf. Portmarnock, Royal County Down, Ballybunion and Waterville as well as the Old Head were among those on his hit list.

In outlining, for instance, how he one day drove the first green at Portmarnock and another had to hit driver-four iron, Woods recalled: “It’s the weather and it’s a lot of fun to play that type of golf. I think it’s instrumental in my preparations for the Open championship,” claiming such a week of preparation was important in lifting his first Claret Jug at St Andrews in 2000.

Woods’s first competitive appearance in Ireland came in the WGC-American Express Championship at Mount Juliet, which he won. Indeed, that event in 2002 was notable also for it attracting a record attendance for a WGC event - with 120,174 over the four days, including a final day crowd of 33,600 people. He returned again for the 2004 staging of the AmEx at the Thomastown venue, although troubled by a back injury he finished ninth behind winner Ernie Els.

His other competitive appearances didn’t go too well: he was on the losing US team at the 2006 Ryder Cup at The K Club, while he missed the cut in the 2019 Open Championship at Royal Portrush.

Woods was a big supporter of the JP McManus Pro-Am tournaments, winning the 2000 edition at Limerick Golf Club and also playing the 2005 and 2010 events which were staged at Adare Manor.

Callum Robinson on target as West Brom keep survival bid alive 21:01
Gerry Thornley: Eight great Leinster wins in Europe that trump Exeter comeback 21:00
Leinster sign Crusaders tighthead prop Michael Alaalatoa 21:08
GAA to take keen interest in Leinster trial to get spectators back at the RDS 19:48
Thomas Tuchel tells Chelsea to focus on the present and seal progress against Porto 19:34
Here is your handy guide to sport on television this week