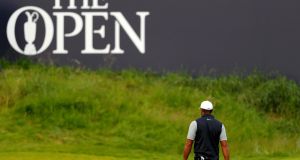 The pathways taken to greatness have varied for Tiger Woods and Brooks Koepka: one a child prodigy who had his “Hello world!” introduction to professional golf, and who has since amassed 15 career Majors; the other, a player who took the less beaten track, playing a global development circuit, to reach the point where he is now the world number one, and a four-time Major champion.

Ironically, their paths first crossed in the final round of the 2013 US PGA at Oak Hill in upstate New York, where the two players were paired together in the final round, far removed from the business end of affairs when Jason Dufner claimed the title.

And while Koepka’s first taste of Major action finished long before the Wanamaker Trophy was lifted, a different kind of deal was finalised when he asked Ricky Elliott, caddying for him for the first time, to make their arrangement a permanent one.

Some six years and four Major titles later, the success of that partnership is in plain sight for all to see. Theirs has developed into one of the best player-caddie relationships on tour.

Unsurprisingly, Woods sought to catch a piece of how the duo would map out their strategy for this 148th British Open on the Dunluce links, a place where Elliott and Graeme McDowell as teenagers would cycle up from the town, place their bicycles by the wall, and play for as long as they were allowed. Elliott knows the terrain as well as anyone; and Woods reached out to Koepka in a text message suggesting perhaps they could hook-up in practice.

“I texted Brooksie, congratulations on another great finish [in the US Open]. What he’s done in the last four Major championships (1-2-1-2) has been just unbelievable; to be so consistent, so solid. He’s been in contention to win each and every Major Championship. And I said, ‘Hey, dude, do you mind if I tag along and play a practice round?’ I’ve heard nothing,” revealed Woods.

That lack of response to Woods’s suggestion might provide a hint that Koepka perhaps views Elliott’s know-how as a little more precious this time. Why would he share information with one of his main rivals?

And for Koepka, who flew in last Friday to mix some sightseeing and meeting Elliott’s family with the task of acquainting himself with the links, that tie-up with his caddie has special significance this week.

“I’ve got my own chip on my shoulder for what I’m trying to accomplish. I’ve got my got my owns goals I want to set, and that’s where I find I guess my chip. How many Majors I want to win, how many wins, my own accomplishments,” said Koepka.

That sort of talk is reminiscent in many ways of how the younger Woods used to talk. Now 43, his body ravaged by injuries, the 15-times Major champion – with the pursuit of Jack Nicklaus’s record of 18 the only game in town for him – has adopted a softly-softly approach in terms of the number of tournaments he has played this season.

Of course, Woods’s win in the Masters last April changed everything, bringing that pursuit of Nicklaus back into the equation. He has only played three times since (missing the cut in the US PGA, claiming a top-10 finish in the Memorial and finishing tied-21st in the US Open) and his time here, with caddie Joe LaCava diligently filling his notebook, has been one of learning a course that is brand new to him. No wonder he’d have loved Elliott’s inside track.

“I think I’ve seen enough of it to understand that I’m still going to have to do quite a bit of homework in my yardage book of trying to figure out how I’m going to play each hole with different winds that are going to be predicted to blow and where to miss the golf ball in the correct spots,” conceded Woods.

He added: “Joey’s done just an unbelievable job of getting numbers. He’s gone out a number of different times because he knows the weather is going to change, the wind is going to change. Our carries are going to be different. So trying to figure all that out and then put together a game-plan that’s going to work.”

And is that game sharp enough?

“It’s not as sharp as I’d like to have it right now. My touch around the greens is right where I need to have it, I still need to get the shape of the ball a little bit better, especially with the weather coming in. I’m going to have to be able to cut the ball, draw the ball, hit at different heights and move it around.”