Clarke basking in the reality of a dream come true 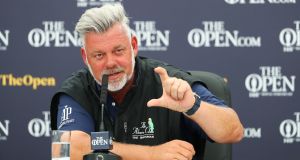 Darren Clarke: “You think about that time, when everything that was going on, whether we were ever going to have a tournament such as this? It was beyond the realms of possibility.” Photograph: Francois Nel/Getty Images

The short game practice area is hidden away, amid the sand hills that actually form part of the Valley links, the other course on the property.

It was there Darren Clarke, dressed all in black, chose to retreat to, chipping away, occasionally hitting lob wedges, other times bumping and running the ball. All the time working, for he knows it is worth the effort.

One dream of his has already come to fruition, the fact that this 148th staging of the Open Championship has come to his neck of the woods, to the Causeway Coast. Can he dare dream again in this week of weeks, that he’d be the one lifting the Claret Jug as its oldest ever champion?

Others, perhaps with greater designs on actually winning, have been picking his brains; Justin Rose and Adam Scott among them. There is no code of omertà as far as Clarke is concerned. They’ve asked questions, he’s answered them.

“I probably told them too much, really,” admitted Clarke, soothing his conscience by adding: “Of course I want to beat them. But at the same time, they’re all good guys, I like them all. I’ve been giving them whatever information that they wanted and a little bit more.

“It will be interesting to see, especially for myself, how some of the best players in the world try to play this golf course. You can try and take it on at your peril, if you want to, or you can try to play smart and take it over corners, but with doing that you need to be very committed to your lines. Because if you’re taking an iron and going over, if you push that five, ten yards, you’re in thick rough, lost ball, and you have to be committed.”

That this day has come at all is, as Clarke pointed out, a wonder.

He recounted the story of how he’d been working part-time in a bar when a bomb scare call came in. Except it was for real. The place was cleared, and half an hour later it was a pile of rubble.

“That was life in Northern Ireland, bombs were going off frequently. And a lot of people, unfortunately, paid a heavy penalty for being in the wrong place at the wrong time. But that was our life back then.

“You think about that time, when everything that was going on, whether we were ever going to have a tournament such as this? It was beyond the realms of possibility. It was just never going to happen . . . . this has been an incredible journey for what we’ve come through.

And Clarke will be the figurehead, in a way, for he is the chosen one to hit the first tee shot come Thursday morning. He was asked by the R&A’s Martin Slumbers three weeks ago if he’d perform the honour. He’d kept it close to his chest, although its revelation hardly came as any great surprise to anyone.

“You’re one of the last people I’d think of as a ceremonial golfer,” came a comment from the press corps.

“But that’s part of it, isn’t it? That’s what they [the R&A] do . . . . and I just hope I manage to get one going straight down the fairway,” retorted Clarke, who added jokingly that he may have to push his gym session forward to 3am to accommodate the early tee time.

His hope is that he is not merely a ceremonial player, that one good shot will actually lead to another and that he’ll be competitive on his own turf. Clarke primarily plays on the Champions Tour stateside these days, and his recent appearance in the DDF Irish Open at Lahinch (missed cut) was his first appearance on the European Tour since last year’s British Open at Carnoustie.

A look at the official world rankings point a finger at where he is: 2,080th. A long, long way from Brooks Koepka. But professional sportsmen become professional for a reason, it is that competitive instinct. And Clarke has never lost that.

“Dealing with your own expectations is part of the whole thing for me. I’ve always been good and bad, pretty hard on myself in the past. But I’m determined this week to enjoy it the best I can. Whether I play well or don’t play well, it’s a huge thing for all the Irish golfers, for Northern Ireland, for me, that lives here a little bit, to have the Open at Portrush. ”