No panic from Fleetwood as he goes hunting an elusive Major 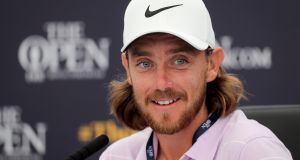 No airs and graces, not from Tommy Fleetwood anyway. The Englishman was spied lugging his own bags through Belfast airport on his arrival on Sunday.

“I try and save my hours on private jets for necessities really, if I’m going to do it,” he explained of eschewing such trappings which are part and parcel of everyday life for many of his fellow players.

Perhaps that sought-after win in a Major would lead to a change in mind. Or maybe not, given how grounded he has remained even after his Ryder Cup heroics of last year in Paris.

Yet that quest for the breakthrough win in the Majors will continue here on a links which he admitted has been “pretty eye-opening” in its conditioning and splendour.

Fleetwood has been a model of consistency on tour this season: 15 appearances, 15 made cuts. However, such flatlining has come at a price, and he has yet to savour a tournament win so far this year, with a best finish of tied-third in the Arnold Palmer Invitational.

“It’s difficult to win,” he said, “and you never know when the opportunity is going to come...you can’t really force four tournaments a year. You can prepare as well as you possibly can, and then you have to play well in those weeks. I think when you get to a certain point in world golf, when you play week-in and week-out with the best players in the world, every single one of the Majors becomes not really an experience [but] an opportunity to win a Major.

“I haven’t really been close this year, but I’ve played some consistent stuff in other events. I’m 28, and your career is a long time. We’re not tennis players or football players.

“At the moment I’m just about reaching what should be my peak year... but putting the urgency or putting too much pressure on yourself is not going to do yourself any favours. [You] just keep doing things as well as you possibly can and, one, two, three Majors, hopefully at least one comes along,” said Fleetwood.

If he were to listen to anyone on tour it would most likely be Francesco Molinari, his Ryder Cup partner of last year. Molinari, indeed, serves as an example of someone who served his time before making a Major breakthrough at Carnoustie last year; and the Italian is not one for sensing any need for Fleetwood to press any panic buttons.

As Molinari put it of Fleetwood and of winning tournaments, “It’s not as straightforward as some people think it can be. There’s a lot of great players out here and he’s definitely one of them, but he is still very young. I think he’s doing all the right things. He’s trusting the people around him, pushing hard to get better, and then you just need a bit of luck at the right time. I’m sure his time will come very soon.”

Fleetwood – playing in his sixth British Open, having missed the cut in his first three – contended for a time last year, ultimately finishing 12th behind Molinari.

“Last year the rhythm of golf I was playing, I was consistently getting myself in contention,” he said, which included going into that final round at Carnoustie with a chance only for his bid to unravel with a three-putt on the fifth and then hitting out of bounds on the sixth as his friend took his opportunity.

“That’s what it came down to, save two or three shots over those holes and I’m very, very close...I’d love to be in that position again,” said Fleetwood.