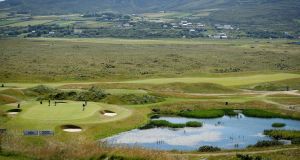 Maybe the decent weather so late in October didn’t help, serving only as another smack in the face for the first golf-less day under Level 5 restrictions. For, as the sun shone in cool but perfect weather for the sport, courses in the Republic of Ireland were silent, with no sound of metal clubheads hitting balls or any cries of exasperation as putts slid by holes.

Instead, there remained exasperation of a different kind, an element of disappointment and frustration, that golf had been taken off the agenda of all club players for six weeks which, more than likely, means that little or no play will take place for the majority of clubs members for the rest of the year.

John Farren, the general manager at Ballyliffin, caught the general mood: “The delay in informing clubs and members – less than 12 hours notice – is reflective of the lack of proper representation for an industry that supports thousands of jobs, generates millions in overseas visitor revenue and provides a social and physical outlet for over 400,000 golfers in the country.”

In the case of Conor McKenna, the head professional at Concra Wood outside Castleblayney in Co Monaghan, the shutters, came down on his golf shop. For someone resident in Northern Ireland, and who crossed the border daily to perform his work duties, there is the irony that, should he wish, he can go and play a few rounds in the North where golf courses continue to remain open under the Stormont Assembly guidelines.

“I think it is a poor decision,” observed McKenna of golf’s mass closedown in the Republic. “There’s no evidence golf has created any spikes in four or five months. It seems unfair that you can play in six counties and there’s no golf in 26. I don’t see much logic.

“Our course has 240 acres and you’re out in the air and, with daylight fading, there’s even going to be less people playing. There was no clarity about what was going to happen. In business and in life all you want is some clarity and there wasn’t any.”

There was, as Eamonn O’Donnell, the director of golf at Dromoland Castle, “shock and disbelief” among his team and members at the closedown order. “We had worked behind the scenes ensuring the safety of our staff and members over the past number of months by putting all necessary protocols in place. Golf is a game that provides both mental wellness and exercise, for our members it became an important element in their weekly activities.”

O’Donnell had considered “lobbying in conjunction with industry partners to seek a reverse on this decision,” but Minister for Health Stephen Donnelly’s messaging in the Dail that “no sports are getting an exemption” seemed to put a stop to that before it got the chance to get going.

Still, the fact of the matter is that other sports have gotten exemptions, at elite level, but also with under-19s allowed to continue training in pods of 15 and less.

As John O’Sullivan, the director of operations at Dundalk Golf Club observed, “As we had been very careful all through the pandemic, we had anticipated that we would still be open for limited golf with 5km restrictions as per the previous lockdown. All our members are conscious of the over-riding point, which is that public health is important and we must all help to limit the spread of the virus. However, it is a little confusing when some sectors, [as in] amateur contact sports, are allowed continue.”

Jeff Fallon, the general manager at The Royal Dublin, also talked of “disappointment and frustration” at the order to close. “Golf is an outlet for so many of our members and our average age would be around the 60 mark, so a large portion are in the vulnerable age category and golf provides much needed physical and mental support during what has been a particularly tough period for them,” said Fallon.