English golfer cards an eagle and 10 birdies in opening round 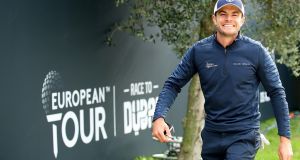 English golfer Laurie Canter smiles as he walks off the ninth green after shooting a first round 60 at the Italian Open at Chervo Golf Club in Brescia. Photograph: Warren Little/Getty Images

England’s Laurie Canter carded a brilliant bogey-free 60 to open up a four-shot lead after the first round of the Italian Open.

The 30-year-old made an eagle and 10 birdies to get to 12 under par in a round that was the lowest of his career, the lowest of the European Tour season so far and the lowest at this event since it became part of the Tour in 1972.

The effort also matched the lowest-ever European Tour round to par, although preferred lies meant that Canter was denied a course record at Chervo Golf Club.

After an impressive amateur career, Canter has spent half of his time in the paid ranks on minor tours, needing to graduate four times from the European Tour’s qualifying school before claiming three top 10s in his last eight events.

In Brescia, Canter finished his first nine holes with a hat-trick of birdies after starting on the 10th as he turned in 31.

He then added gains on the third and fourth before sending his second shot to 16 feet for an eagle on the sixth, and another trio of birdies left him clear at the top of the leaderboard.

“It feels great,” he told europeantour.com. “The score, days like that, the back nine there, everything’s gone in. I gave myself some chances and it was just one of those days where you’ve just got to enjoy the ride.”

South African Dean Burmester and Dane Joachim B Hansen were Canter’s nearest challengers after they both carded rounds of eight-under 64.

Jonathan Caldwell was the best of the three Irish golfers in action, carding seven birdies in a five-under 67. Cormac Sharvin made six birdies but also dropped three shots in his three-under 69, while Gavin Moynihan will need to go low in his second round after returning a level-par 72.