Confident Koepka clearly the one to beat at Pebble Beach 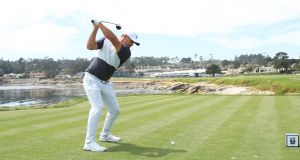 Brooks Koepka plays a shot from the 18th tee during a practice round prior to the 2019 US Open at Pebble Beach Golf Links, California. Photo by Andrew Redington/Getty Images

Rory McIlroy’s four Major triumphs between 2011 and 2014 hinted at separation from the rest of the world’s leading contenders. After Jordan Spieth claimed three of the big four titles between 2015 and 2017, golf had a new hero.

The question of what should make Brooks Koepka different from those who have enjoyed recent spells of domination shows just how transient the sport’s upper echelon can be.

Koepka arrived at Pebble Beach for this US Open with the extraordinary record of four Major wins from his last eight starts. Since the start of 2017, his combined Majors aggregate of 54 under par beats the next best player, Spieth, by 21 shots.

If Koepka prevails here in California, he will become only the second player in history – and first since Willie Anderson in 1905 – to win three US Opens in a row. All of this while holding only a decent regular tour CV and wearing more chips than a Blackpool promenade pavement on a Sunday morning. By Koepka’s own admission, a sense of grievance, relating to a perceived lack of credit afforded to him, drives him on.

There may be a danger of the 29-year-old’s position appearing contrived. His latest complaint, delivered on Tuesday, related to a lack of prominence in the promotional footage put out by US Open’s host broadcaster.

In truth, his tilt at history-making has been a significant part of the build-up, along with Tiger Woods – as is customary – and, after his heroics in Canada on Sunday, McIlroy.

To suggest Koepka has somehow been glossed over in the Pebble Beach prelude would be laughable. The man himself admitted as much.

“I still think it’s weird when I walk into a place and I can see eyes are on me just for dinner,” Koepka said. “And I’m like: ‘What’s everybody staring at?’”

Koepka does not tend to go out of his way to generate the publicity he seems to believe – or, rather, needs to believe – is lacking. He has not, for example, been a participant in New York trophy tours, after his Major wins.

When approached in environments removed from standard press conferences, he can be curt. Could television firms build ratings on the back of Koepka dominance? No. That is not a slight on his ability; rather he does not have distinct, identifiable personality traits or the panache of, say, McIlroy. And yet privately, Koepka is regarded as great fun to be around.

“He doesn’t do a lot of the things outside the ropes, social media etc, because I don’t think that’s in his nature,” explains Ricky Elliott, now in his sixth year as Koepka’s caddie.

“He is a golfer, he just wants to get on with his golf. He doesn’t necessarily want to be a star but his golf has proven that he is there now. He is getting the recognition that he deserves but he isn’t out there to have smoke blown up his ass or have that done to him; he is out there to win.”

And win he has; the 2017 US Open at Erin Hills triggered a Majors run that, awkwardly for some, started a conversation about where Koepka stands in the pantheon of golfing greats.

Last month at Bethpage, Koepka showed an unseen element of Sunday fallibility as a supposedly unassailable lead was almost eaten up by Dustin Johnson at the US PGA. For all it can be inferred that the wobble shows weakness, that the Floridian retained the Wanamaker Trophy means he can avoid total capitulation where others may not.

“Now I know how to reset under pressure,” Koepka said. “I know how to do that, really handle myself and right the ship. I think that’s going to be important going forward.”

Elliott insists the notion that Koepka has little time for golf as a sport is overplayed. “He loves it,” says the Northern Irishman. The caddie concedes his employer’s appreciation for what he does was enhanced during a long-term absence through a wrist injury that, for a spell, threatened his very career.

Trey Jones, who coached Koepka during his time at Florida State University, recognises the golfer’s uppity demeanour but computes it in an intriguing way. Did it always exist?

“Absolutely,” Jones says. “He was a player from the start who felt like he had to work for everything. He had a summer job before he came to college. He has never felt like a guy where things were handed to him. He went to the European Challenge Tour rather than hand back for exemptions or sponsorships because he thought: ‘I’ll go work for it.’”

Indeed, Koepka’s route to the top has been unconventional. Three Challenge Tour victories in 2013 earned him a European Tour berth for the following season. A rookie of the year award continued Koepka’s upward trajectory; by February of 2015, he was a PGA Tour winner, at the Phoenix Open. Curiously, he has won just a single standard tour event – the CJ Cup last October – since.

“Brooks was driven, he knew what he wanted to do and ultimately where he was going to get to,” Jones says.

“That passion and serious approach to his game stuck in my mind. His personal confidence was a big thing. If you look at him now, he still has that but just with a different set of people. That’s why he has such a calm attitude out there, he is confident whatever the challenge is. He doesn’t need to get worked up about it.”

The Florida State coach contradicts one widely held Koepka theory: that he suffers on account of not having the college reputation of Spieth, Rickie Fowler or Justin Thomas. “I think it is easy to say that ... at one time he was the No 1 player in college,” Jones recalls.

Elliott and Jones both identify an intense work ethic as a key Koepka discipline. Sharp retorts won’t transpire by accident, after all.

“He has got his mind round the Majors, he is confident in the position of being one of the best players and that takes it a bit of time,” Elliott adds. “He has massive belief in himself. Getting over the line at Erin Hills was like breaking through a tape and I don’t think he is going to slow down.”

If you are only as good as your last Major – and, in respect of Koepka, your last couple of US Opens – then he is the man to beat. Again.