Charles Schwab Challenge - All you need to know

Your guide to the PGA Tour’s return, where defending champion Kevin Na is a 45/1 shot 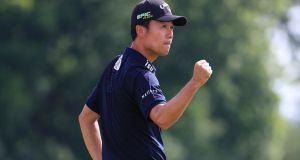 Kevin Na is the defending champion at the Charles Schwab Challenge at Colonial Country Club in Fort Worth, Texas. Photograph: Getty Images

Where: Colonial Country Club, Forth Worth, Texas. The course: Designed by Perry Maxwell and John Bredemus – 7,209 yards par 70 – the layout is known as “Hogan’s Alley” for its association with Ben Hogan, who was a five-time winner of the Colonial Invitational. The signature hole comes early, the par four fifth hole measures 481 yards but it is location alongside the Trinity River which provides the wow factor.

The field: On the PGA Tour’s return for the first time in three months, this tournament – behind closed doors – has brought out the big guns. All five of the world’s top-five players – Rory McIlroy, Jon Rahm, Brooks Koepka, Justin Thomas and Dustin Johnson – are playing. The strength of the field is reflected in the fact that no fewer than 101 players have won on the PGA Tour. Defending champion: Kevin Na, who included a low round 62 in his second round, claimed his third career PGA Tour win, finishing four strokes clear of runner-up Tony Finau.

Irish in the field: McIlroy – in a marquee group with Rahm and Koepka – tees off at 7.06pm Irish times; Graeme McDowell, who has toned-up during the tour’s lockdown, has a 1.34pm Irish time start alongside Patrick Reed and Marc Leishman. British Open champion Shane Lowry, who has Darren Reynolds on his bag as regular caddie Brian Martin has family time off, is grouped with Cameron Champ and Jim Herman at 2.18pm Irish time.

Betting: No surprise to find world number one Rory McIlroy leading the betting at 7/1 with Jon Rahm next at 11/1 . . . however, with no form guide given the competitive inactivity of recent months due to the Covid-19 pandemic, the return to Colonial makes a strong case for the horses for courses theory: as such, a strong case can be made for defending champion Kevin Na who also finished fourth in 2018 who is a 45/1 shot. Emiliano Grillo at 125/1 has also featured strongly in past showings and is worth an each-way look.