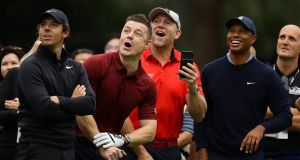 “Tiger doesn’t look the same as me, has had a very different upbringing to the one that I have had, but he was my hero growing up,” Rory McIlroy. Photograph: Getty Images

Rory McIlroy hopes golf can play its part in delivering a more multicultural society as it returns to tournament action days after the funeral of George Floyd. McIlroy cited his own idolisation of Tiger Woods as a reason why skin colour shouldn’t lead to the placement of barriers.

After a three-month absence triggered by coronavirus, the PGA Tour will restart with the Charles Schwab Challenge in Texas. It is the death of Floyd, rather than the pandemic, which feels most prominent on the landscape after demonstrations on both sides of the Atlantic. The Tour has initiated a moment of silence each day in Floyd’s memory and left the 8.46 tee time free, in reference to the period he was pinned to the ground by a policeman in Minneapolis.

“A great word that I’ve sort of been thinking of over the last couple of weeks is ‘tolerance,’” said McIlroy. “I think everyone can just be a little more tolerant, and a little more educated and not as ignorant.

“My hero growing up was Tiger Woods. Tiger doesn’t look the same as me, has had a very different upbringing to the one that I have had, but he was my hero growing up, and it didn’t matter what colour his skin was, what his beliefs were. Tiger was my hero, and he’s been a lot of kids’ heroes over the years that have grown up playing golf. We’ve been very lucky to have him in our game. I think that there should be more people like him in golf.”

McIlroy was struck by a conversation, filmed in recent days, between Harold Varner and the PGA Tour’s commissioner Jay Monahan. Varner is one of a tiny number of black PGA Tour members. “These issues I think really hit home with me,” McIlroy explained. “Harold said, it maybe just isn’t about the players, it’s about everyone in the game of golf. There’s so many people that are involved with the game, and as long as we continue to give people from different backgrounds opportunities to be in golf, that can only be a good thing.”

Woods called last week for a “safer, unified society” on account of the “shocking tragedy” of Floyd. The 15-times major winner is not in the Charles Schwab field but speculation suggests he may feature next week when the PGA Tour reaches South Carolina.

McIlroy, who reiterated his belief that a world circuit in golf would be beneficial, praised the PGA Tour for “robust” Covid-19 procedures. “It has felt very safe,” said the Irishman. “Everyone is doing the right things, and the people that are involved with the tournament are wearing masks and wearing gloves and there’s sanitiser everywhere you look. It feels safe. I feel safe, and I would say basically everyone else that’s here feels the same way.

“I think it’s an important week because golf can show that we can play in a socially distant manner. We can conduct a tournament and adhere to all the safety protocols that have been put in place.

“It is going to be very easy to fall back into old habits because it’s just what we’ve done. I’d say for the viewing public just to give the players and the caddies a little bit of leeway in terms of if they see something on TV that isn’t quite right. We’re having to figure it out as we go along, as well. But I think golf can show that it can be played, especially at the highest level, and adhere to the guidelines that everyone else has to adhere to.”