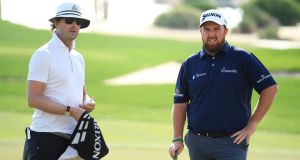 Shane Lowry and his coach Neil Manchip during the Pro-Am ahead of January’s Abu Dhabi Championship. Photograph: Andrew Redington/Getty

There is a sense of community that remains vibrant long after elite young golfers have left the technical and pastoral care of the Golfing Union of Ireland (GUI), shedding their amateur skins in the hope of propelling themselves towards the ranks of the professional game.

No matter how lofty the perch, they eagerly embrace the practice of helping to advise and nurture the next generation.

During the two months of the lockdown and its previous iteration Paul Dunne, Paul McGinley, Rory McIlroy and acclaimed coach Pete Cowen have fielded questions and queries from the brightest young players in the GUI’s Under-16 and Under-18 national squads to the National Training panel and Team Ireland constituents. In Cowen’s case that extended to provincial coaching cadre.

British Open champion, Shane Lowry, will add his name to the list this week as Ireland’s talented young golfers are offered a privileged insight, not alone into the professional game but the experiences of their predecessors during their days at the top end of amateur golf.

The GUI’s national coach, Neil Manchip - he is also Lowry’s coach - has facilitated that process. He’s also taken on a role of quiz master amongst other lighter distractions for his charges when the fairways were out of bounds due to Coronavirus restrictions: now that golf clubs have reopened, his duties will take on a more orthodox shape.

The feedback following the Zoom calls has been overwhelmingly positive. Manchip explained: “All the Irish players are fantastic in terms of getting involved in giving a hand out. Paul Dunne spoke to the U-16s and U-18s, Paul McGinley to the national men’s squad, Peter Cowen was with the coaches while Rory was with everybody; the national squad, Team Ireland, Under-16s, Under 18s and a few captains, selectors and officials. All four have been fantastic.

“What we do is get a bunch of questions in advance from all the people who are going to be on the call. There would be a bit of duplication. Rory spoke very fondly of his time as an amateur. He has an amazing recall for tournaments in which he did well or screwed up in, had a chance to win or didn’t win.

“He moved onto turning professional and a couple of lads asked him questions on when he thought they should turn pro, should they get to a very high level of amateur golf and play a couple of Walker Cups or should they turn pro earlier and get some experience on mini tours and things like that.

“He spoke about his experience on strength and conditioning, tournament golf and how he coped with other aspects of life as a professional golfer. He speaks brilliantly, very open about everything. All the guys are very good with the young lads.

“We had 20 people on that call with Pete Cowen. Pete gave great feedback from the time he started off coaching as a club pro to moving to the European Tour and how things have changed in global golf in the last 20 years. He spoke to the lads about what he thought was important from a biomechanical point of view, mentoring point of view and dealing with difficult situations. He has so much experience.”

It’s not just the elite Irish golfers that are selfless in helping their amateur brethren. Keith Egan, a member of the national panel, works as a personal trainer and he has supervised workouts for the squad.

Manchip said: “They’re fantastic. We do that every week. We would have different Zoom calls providing squad information and giving updates on the latest tournament positions internationally. The amateur golfing schedule has been pretty much decimated.

“We have a few events on the calendar which have been shifted and recommence from September and October; the European Championships for example. We have regular meetings to update the lads on what’s going on internationally and domestically.”

There are lighter moments. The Scot embraced the role of quiz master, pitting the underage squads against each other “which is as competitive as you’d expect,” he said. “The Under-18s give me some good questions for the Under-16s and vice versa. When you are asking about music and stuff like that, I need to get a bit of guidance.

“Our ‘Bake-offs’ have been good. The Under-16s have really embraced it and come up with some great stuff. We had a competition and Conor Purcell (a Team Ireland golfer) judged it. A lot of the guys have continued on and it has got them into different habits; a bit of baking and a bit of cooking.

“We have had some good fitness challenges, 3k races and 1k challenges. One of the lads, Alex King from Tramore, who is on the Under-16s squad, did two minutes and 50 seconds for one kilometre.”

Pádraig Harrington’s brilliant instructional videos on Twitter, with a nod to the camerawork of son, Paddy and occasional cameos from his dog, Wilson, have understandably proved hugely popular.

The three-time Major winner and European Ryder Cup captain’s ability to communicate and inform about various aspects of the golf, mental, physical and technical, has been as impressive as it has entertaining, in the easily digestible format. The clarity is a skill in itself.

So as a coach what does Manchip make of the clips? “I’m not on Twitter but I have seen some of them. Pádraig has been entertaining everyone with his videos. He does that in a really good way and explains things nicely going from difficult shots to really straightforward things that any club golfer can get something out of.

“Pádraig’s amazing [in helping others]. He had a really good session with us a couple of years back in 2018 when he came over to Carton and gave a really good talk to the lads for three hours. Pádraig is really good in that environment. All the really good Irish golfers are so good in doing sessions like this and they’re so open and honest, enjoyable to talk to; it’s a really good format for them.”

Manchip has been in regular contact with Lowry as countdown to the resumption of the PGA Tour in America early next month gathers momentum. “He sent me a few videos. He’s looking great, very powerful. He’s got a good gym in his house and works out with Robbie [Cannon] every other day when they do a video call.

“They [America] closed down a little later and opened up a little earlier. I reckon it was about three weeks he didn’t play, had a bit of an indoor set-up going, a bit of chipping and putting. They are in a pretty good environment there, down in Palm Beach, lots of good courses to play, lots of good players around looking to play.

“Shane and Rory play a lot together. They both enjoy getting out on the golf course rather than standing on a range trying to make things perfect.”

On a personal level Manchip and his wife Aideen are expecting a second child, due in early June, so for now he spends plenty of time with Hugo (12), whose love of sport includes Gaelic Football, his favourite, hurling, rugby and a little bit of golf, kicking a ball or pucking around on the green near the house.

The re-opening of golf in Ireland means that the players have to be less inventive in terms of practice and can instead take to the fairways once again. So what advice would he give to club golfers, irrespective of handicap? “One of the things we would work on is playing each shot and not thinking about it too much.

“We all get bogged down by thinking about things too much. We tend to feel that the more we think about it and the harder we try the better the outcome will be. So keep playing the next shot; whatever happens on the previous shot has no consequence. And most of all, enjoy it.”