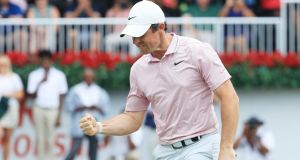 Rory McIlroy celebrates after winning on the 18th green during the final round of the Tour Championship at East Lake Golf Club in Atlanta, Georgia. Photo: Streeter Lecka/Getty Images

Kerching! Kerching, kerching! Make that a drum roll of 15 million kerching sounds for Rory McIlroy, who scooped the biggest jackpot in golfing history – a payday of $15 million – in claiming the season-ending Tour Championship on the PGA Tour to also lay claim to the FedEx Cup title after a long old day on the famed East Lake Golf Club layout in Atlanta.

With Saturday’s third round suspended due to lightning strikes and completed on Sunday, the 30-year-old Northern Irish man finished his day’s work with a final round 66 that saw him finish on 18-under, four shots clear of runner-up Xander Schauffele who had the compensation of picking up a cheque for $5 million.

“My goal today was not to go and win the normal tournament but to shoot the lowest score of the week. That was my goal going out. It looked like it would be a three horse race but it is tough coming in, it is such a cool way to end what for me has been a great season. I will try and improve for next year again,” said McIlroy.

McIlroy started the final round a stroke behind world number one Brooks Koepka and, for the most part, the game of nip-‘n-tuck was one which had little between the pair locked for most of the final round with Scahuffele and Justin Thomas also part of a complicated package of potential champions.

Yet, almost in the twinkle of an eye, the situation changed with a McIlroy birdie on the Par 4 12th from four feet that combined with an unlikely bogey from Koepka – who missed for the first time in the tournament from inside five feet as the putter betrayed him – and, suddenly, the man from Holywood in Co Down had opened a cushion over everyone: a two shot lead over Schauffele, three on Koepka. It would get better before it got worse and then better again.

McIlroy, who had reached the turn in 33 strokes with birdies on the sixth and seventh, made his move on that backward journey home with birdies on the 12th and another on the 13th from 10 feet. Indeed, that move coincided with a number of speedbumps from his main protagonists and McIlroy’s birdie on the 13th actually moved him four strokes clear.

Unintentionally, he made it more interesting than perhaps it should have been on the next run of holes: McIlroy bogeyed the 14th after missing the fairway left and then bogeyed the difficult Par 3 15th when his tee shot found a greenside bunker and he failed to rescue par. In the space of two holes, his lead had dwindled from four to two.

But on the 16th McIlroy showed his resilience when, after putting his tee shot into a fairway bunker and coming up well short of the green in two, he pitched to 10 feet and sank the putt to save par. That putt, more than any of his birdies, brought a display of emotion as he fisted the air, almost in slow motion as if to reaffirm to himself how important the par save could be.

And on the 17th, McIlroy responded with a 15-footer for birdie that again moved him three shots clear of Schauffele.

The win gave McIlroy a third success of the season – to go with The Players and the Canadian Open win – and also gave him a second career FedEx Cup title to add to his impressive CV. “To win three times is awesome and I feel like I could have won more, I am very proud of myself,” said McIlroy, who returns to the European Tour this week for the Omega Masters in Switzerland.

At the other end of the spectrum, Dustin Johnson – who finished in a tie for last placed position alongside Lucas Glover – admitted to being “worn out” at the end of the regular season. “I’ve got two months off, and I’m definitely excited about that,” said the former world number one.