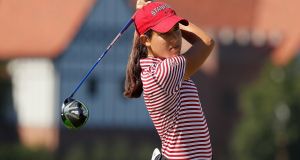 Albane Valenzuela who will play in the ANA Inspiration, the first women’s Major of the year: “I couldn’t say no, they have always been so supportive. It’s the first Major of the year and I love the course.” Photograph: Kevin C. Cox/Getty Images

The green marketing machine has whirred into action early this year. The Masters can wait; Saturday will see the closing round of the inaugural Augusta National Women’s Amateur take to the hallowed turf in Georgia.

This is, according to those who will preside over it, “a historic event that promises to shine a spotlight on women’s golf and help inspire a new generation of players”.

Depending on your outlook, there is a case of unfortunate timing or Augusta National demonstrating – not for the first time – that the greater good isn’t really their concern.

As an epic fuss is made over an international field of 72 – cut to 30 by the time the event switches from the Champions Retreat to the Masters venue – a women’s Major will be taking place from Thursday until Sunday.

The ANA Inspiration, the first Major of the golfing year, has unquestionably been overshadowed by Augusta’s latest attempted demonstration of diversity.

The ANA had already been affected by the rising frenzy attached to the Drive, Chip and Putt Championship, where excited kids and giddy parents take to Augusta National, live on television, on the Sunday preceding Masters week.

Needless to say, the LPGA Tour, which runs the ANA Inspiration, is privately lukewarm – to put it mildly – about the whole business. This has also placed some competitors in a difficult position.

The ANA landed a coup by sealing amateur involvement from Paphangkorn Tavatanakit, the world No 2, Freda Kinhult, who is fourth, and Albane Valenzuela, currently No 5. Jennifer Kupcho, the top ranked amateur in the world, will play in Augusta.

Valenzuela’s story may be the most interesting, and she articulates it impressively. Born in the US, she spent toddler time in Mexico before the Valenzuela family relocated to Geneva for 15 years.

She is now in the penultimate year of a political science and communication degree at Stanford, the California university which counts Tiger Woods and Michelle Wie among its golfing alumni.

The 21-year-old Valenzuela harbours no ill-will whatsoever towards Augusta, which she believes is offering an “unbelievable” opportunity to fellow amateurs this week. It was, the golfer admits, a “tricky” decision to spurn the advances of the Green Jackets when accepting an invite for an ANA return.

“It’s a special Major to me,” she says. “I got the opportunity to play in 2016 for the first time and made the cut. When I did that, my dad pointed out I might have a shot at the Olympics because of the points situation.

“I got invites to tournaments, made a top five, had other good performances, played in a US Open and was able to compete in the Olympics so I have always been so grateful for that original opportunity. It was a turning point in my career.”

Two years ago, Valenzuela received the call from the ANA only for a bike accident the day before she was due to leave for the tournament meaning she had to withdraw. Her Major place was offered again for 2018, when she finished 59th, and retained this time around.

“I don’t think many amateurs have had this number of opportunities from the ANA,” she adds. “I couldn’t say no, they have always been so supportive. It’s the first Major of the year and I love the course. It’s a very significant thing that’s happening at Augusta so I’m sad to miss that but I’m very excited to be going back to the ANA. I don’t think there was a ‘wrong’ choice, that’s just my perspective. I couldn’t say no to ANA.”

Valenzuela’s Plan A is to turn professional immediately upon completion of her degree in 2020.

“Now that I have this back-up of a Stanford degree, I think I’ll go out there a little more freely,” she says.

A bigger picture relates to an Olympic return, having represented Switzerland in Rio. The men’s section of golf’s return to the Games was offset by a raft of withdrawals; the women’s element, though, seemed wholly positive.

“I think the guys made one of the biggest mistakes of their lives,” Valenzuela says. “I’ve never had so much fun. You are surrounded by the best athletes in the world, it is not just about golf. It’s the highest reference for sport. It meant the world to me to be walking in that stadium, right behind the flag bearer.”

Further Olympic recognition looks inevitable. For now, a Major championship is all the better for Valenzuela’s reciprocal appreciation.