US PGA Tour’s anti-doping policy is catching the unknowns

After 11 years of an anti-doping programme, only three players have publicly failed tests 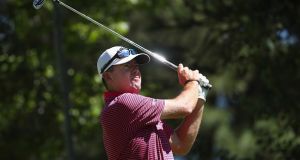 Robert Garrigus has been banned for three months following a failed test for what the Tour describes as a “drug of abuse”. Photograph: Getty Images

It is Singh who stands apart, the only one of those to have publicly fallen foul of the US PGA Tour’s anti-doping policy who is a widely known golfer. Even then there is a caveat. The Fijian, a former world No 1, served legal papers on the Tour after it had rescinded a three-month ban he had been given.

Singh had been suspended after volunteering in a 2013 magazine interview his use of the wonderfully named deer antler spray, which contains the natural IGF-1 growth hormone and was then on Wada’s prohibited list. Singh protested his innocence and said he had no idea the spray contained a banned substance before appealing against the ban. The World Anti-Doping Agency then announced it had dropped its objection to antler juice, which led Singh to claim the Tour was negligent in handling his case, which in turn damaged his reputation. Singh was awarded damages after a dispute lasting years finally ended last November.

“The PGA Tour recognises that Vijay is one of the hardest-working golfers ever to play the game and does not believe that he intended to gain an unfair advantage over his fellow competitors in this matter,” said a Tour statement at the point of resolution.

The image of a 50-something man having regular spray sessions in a bid to remain competitive against the world’s best golfers is a faintly ludicrous one but this affair caused the Tour great embarrassment. On Friday, Garrigus was thrust into the spotlight as never before in his 22-year professional career, which has returned a single main Tour victory and only sporadic appearances in majors. The 41-year-old, who received clinical help for substance abuse in 2003, has been banned for three months following a failed test for what the Tour describes as a “drug of abuse”. As his sanction was announced, Garrigus delivered the ultimate mea culpa.

“After a long period of sobriety, I had a relapse and subsequently failed a drug test for marijuana, a drug that, although legal in many states, is not permitted under the PGA Tour’s anti-doping rules. I mention that it is legal in many states not as an excuse but as a word of warning to many people who use or try marijuana. Legal doesn’t mean it isn’t addictive and legal doesn’t mean there aren’t potentially severe consequences if you use it,” he said.

While there are only 10 states where marijuana is completely legal, the number increases markedly where medical use is concerned. Yet the PGA Tour’s doping manual states: “Involvement with illegal substances goes against the spirit of our sport.”

Legality is only one reason why marijuana is on the prohibited list. But to invoke it in policy raises questions over the Tour’s embrace of sports gambling – which is still banned in many states but not in others as restrictions on that side of the Atlantic break down. Data collated by players and caddies in Tour events is sold to betting companies. Tiger v Phil, where Woods and Mickelson offered exorbitant wagers across fairways in Las Vegas, is listed on the PGA Tour’s full schedule for this season. Could it not be argued that the addiction to which Garrigus admitted is just as likely – and damaging – where gambling is concerned?

The Tour’s guide even concedes a player would not glean on-course benefit from smoking dope. “Athletes are unlikely to use cannabinoids to improve their performance; however, some athletes have used cannabinoids to decrease anxiety before a competition,” it says. “They are more likely to be used as a recreational drug.”

The Garrigus case is exceptional because it is the first publicly reported ban for recreational drug use since the PGA Tour changed its rules in late 2017. Until then, the Tour only revealed bans for performance-enhancing breaches of policy. Jay Monahan, the Tour’s commissioner, said the 2017 rule-change would “better substantiate the integrity of golf as a clean sport”.

Under the regime of Monahan’s predecessor, Tim Finchem, the Tour was criticised for not adopting the Wada code. Rory McIlroy stated at the 2016 Open that he “could use human growth hormone and get away with it” because of lax procedures. Gary Player has insisted for years that golf has a hidden problem. “We have had players who have used performance-enhancing drugs,” said the South African, a nine-time major winner. “Are we ever going to be able to stop it? No.”

Fritsch didn’t fail a test; he realised an over-the-counter weight-loss product contained a banned element. Patel and Barron did, for performance-enhancing drugs, and were each suspended for a year. Hensby declined a test and was banned. “Obviously there’s so many rumours about other players, and it makes me angry,” said the Australian. Stallings self-reported the taking of a growth hormone and was banned for 90 days.

So after 11 years of an anti-doping programme on the PGA Tour, only three players have publicly failed tests, two have self-reported they had taken a banned supplement, one has declined to pee in a bottle and there has been a scenario that ended up in a New York court.

We can’t apply further context because the PGA Tour doesn’t disclose testing numbers carried out by a different body to that used by the R&A and European Tour. “They very much do their own thing,” said a senior golf source on Monday.

The PGA Tour’s approach to recreational drugs in the past has meant scepticism (often unfairly) surrounds any golfer who disappears from tournament view for a concerted period. There was the bizarre instance of Matt Every, banned in 2010 – at a time when the Tour wouldn’t disclose as much – after he tested positive for marijuana inhaled in a room with pals. “I just got three months off,” he said. “I didn’t think I did anything wrong. If one of my friends likes to smoke marijuana now and then, I’m not going to say: ‘You can’t be my friend any more.’”

After Woods, a commercial commodity like no other, was found slumped behind the wheel of his car in Florida in summer 2017, a police toxicology report identified two substances banned by the body which oversees the majority of his tournament play. One of them was delta-9 carboxy THC, the active ingredient in marijuana. The Tour directed questions on the situation to its anti-doping manual, which hardly put inquisitive minds at ease. There was no clarity provided whatsoever over whether Woods was subject to penalty, or if not, why.

There is no widespread sense that golf is awash with drug-taking. Nonetheless, the desire of a multimillion dollar enterprise to preserve its reputation actually only serves to make it look needlessly secretive.

Garrigus, with career earnings of $14.6m, is in a better position than most. Despite Garrigus, Patel and Stallings, maybe there are no others, including household names. Maybe golf is as pure as the driven snow.

Cork’s strength in depth sees them past Offaly 12:13
Coco Gauff’s journey ends at the hands of Sofia Kenin 09:43
Sublime 67 leaves Rory McIlroy right in the mix at Torrey Pines 09:23
Six Nations: A 21st-century tournament that saw Irish rugby come of age 07:00
Wexford hurlers win entertaining contest against Laois 23:03
Here is your handy guide to sport on television this week