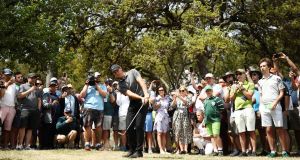 Rory McIlroy plays his third shot on the sixth hole in his match against Luke List during the first round of the World Golf Championships-Dell Match Play at Austin Country Club. Photograph: Ezra Shaw/Getty Images

Some tripped up, others stumbled. Not Rory McIlroy. As Bubba Watson endured bunker woes in his opening defence of his WGC-Dell Technologies title, and Jason Day was outfoxed by the rejuvenated Jim Furyk, there was an opening group win for the Northern Irishman who remained sure-footed throughout in outclassing American Luke List.

McIlroy – a winner of this title in 2015 – carried on the momentum of his recent success in The Players to open his matchplay account with an emphatic 5 and 4 win over List in their Group 4 encounter.

From the get-go, McIlroy took a grip on his match. He went one up on the second hole with an eight-foot birdie putt, increased his lead to two on the eighth where List missed an eight-footer to save par and then moved three up after 11 holes when his opponent’s tee shot leaked left to find a watery grave on the Par 3.

Sticking to an aggressive gameplan, McIlroy went for the green on the Par 4 13th of 277 yards and, carrying the lake to find the fringe of the green, he then left his approach six feet short of the hole and rolled in the birdie putt to move four up. On the 14th, List’s tee shot drifted into a fairway bunker and his fate was sealed by McIlroy who hit his wedge approach to eight feet for a winning birdie.

“It probably reads more nicely than it was . . . [18 holes] it is a sprint and you have to get off to a good start and fortunately I did.”

McIlroy’s win over List was comfortable, with none of the upset drama which unfolded elsewhere. Probably the biggest upset of the opening day’s play was Denmark Lucas Bjerregaard’s win over world number five Justin Thomas. The Dane was two down through three holes but then steamrolled Thomas to sign for a 3 and 2 win.

For defending champion Watson, there was the ignominy of failing to escape a greenside bunker on the 18th hole and, after two attempts, picked up the ball to concede the hole and the match to Kevin Na. And Furyk too continued his resurgence in form, with a brilliantly crafted two hole win over Day.

Jordan Spieth, who has fallen to 30th in the world rankings, has struggled with many facets of his game of late, including his putting, but the Texan showed his fighting qualities when coming from three holes down on the front nine to fight back and secure a halved match with Billy Horschel.

“It was nice to salvage a tie, it felt like a win,” admitted Spieth. “It is a bump in confidence, progress, one day at a time, one shot at a time. We’re keeping our head down and trying to do that.”

Both Tommy Fleetwood and Francesco Molinari – who became the first European partnership to win all four of their matches together in the Ryder Cup in Paris last year – once again demonstrated their matchplay prowess: Fleetwood was a 3 and 2 winner over Korean Ben An, while Italian Molinari was a comprehensive 5 and 4 winner over Japan’s Satoshi Kodaira.

Molinari raced into an early lead, opening up with birdies at the first, second and third, turned three up and won the 10th and 11th to move five holes clear and eventually seal the deal on the 14th green.

“I played really well, made some nice putts throughout the match. I’m really happy with the way I played. It’s a little easier when you start that way but you still have to play a lot of golf and close the match out. All in all, [it was] a very good day,” said the Italian.

Fleetwood was “just happy” to get the opening win. “When you play in this tournament, there is no easy match at all. There is no let-up throughout the week. I’m happy to get the win.”

Ian Poulter claimed each of the last two holes as he won 2 up against Kevin Kisner to banish the memory of last year’s 8 and 6 quarter-final loss to the American, while Tony Finau beat Keith Mitchell 2 and 1.

Poulter said: “It was a fun match. Up, down, up, all square with a couple to go, it was interesting.”

Paul Casey – who successfully defended his Valspar title on Sunday – continued his form with an opening day’s win over Mexican Abraham Ancer. “You just try to manage the energy after last week. That was pretty tiring, but good tiring,” he observed.

Tiger Woods had to work hard to claim a 3 and 1 win over Aaron Wise. “It was a pretty emotional match, it was up and down, up and down. There weren’t too many holes halved. It was one of those matches where we weren’t playing our best and it exposed up a little bit . . . it was about beating the guy right in front of you and I was able to do that.”

Sergio Garcia was five up after 10 on Shane Lowry before the Irish golfer birdied the 12th and 13th to keep his hopes alive. But he was unable to make any further inroads and Garcia closed out victory on the 16th green.

Group 15: K Na bt B Watson 1 up; J Spieth halved with B Horschel