Rory McIlroy let his frustrations get the better of him after snapping his golf club during the opening round of the Zozo Championship in California. Video: Reuters / NBC Golf 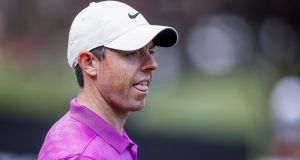 Rory McIlroy during the first round of the Zozo Championship at the Sherwood Country Club in Thousand Oaks, California. Photograph: EPA

Sebastian Munoz recovered from a late double bogey to take an early lead at the Zozo Championship in California after an opening round featuring two eagles.

The Colombian only had five pars across his opening round, starting with a bogey and three birdies before going birdie-eagle-bogey-par to reach the turn at four under.

A wild tee shot on the 14th led to a double bogey before a second eagle to finish the round on an eight-under 64 to lead by one shot.

Tyrrell Hatton is tied for second after a 65 along with American Justin Thomas, the former PGA Championship winner who picked up four shots in the last three holes.

It was a day to forget for Rory McIlroy whose round of 73 left him tied for 64th, while Tiger Woods reached the turn in three over and dropped another shot to finish on 76.

The field has no cut and will be the last event for many of the players before the rescheduled Masters from November 12-15th.